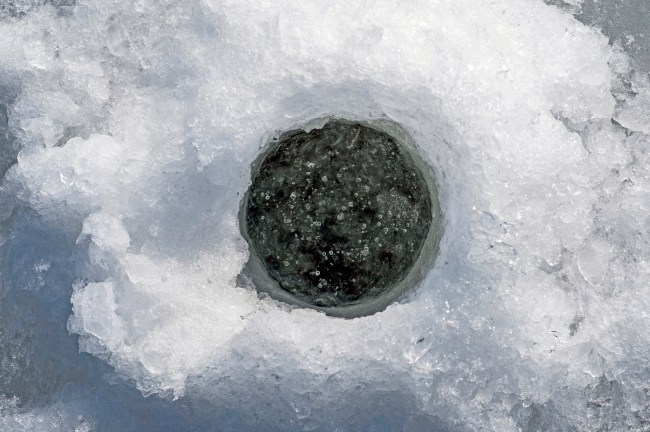 An ice fisherman in Minnesota was targeting Northern Pike when he pulled up a massive Muskie that registered close to a state record. What’s wild is he was using a fishing setup that had him pull up the 54-inch Muskie by hand, a fish estimated at over 50-pounds, and he pulled that gigantic fish through a tiny 10-inch hole in the ice.

A clip of this catch was shared on the viral news YouTube channel ViralHog and it shows Mark Kottke pulling up the massive muskie on Minnesota’s Lake Lacs back on February 22nd. According to For The Win, the Minnesota state record is 57 1/4 inches for Muskie while this one measured at a massive 54 inches long and a girth of 27 inches:

“This was the biggest fish I’d ever seen caught and is only a few inches from the state record,” Birke told USA Today/For The Win Outdoors, revealing the fish’s girth as 27 inches. “Truly amazing to witness in person.”

For comparison, the Minnesota state record for a caught-and-released muskellunge is 57 1/4 inches landed at Lake Vermilion on Aug. 6, 2019 by Corey Kitzmann of Davenport, Iowa. The state record for a muskie on a certified scale is 54 pounds caught at Lake Winnibigoshish in 1957. That fish was 56 inches long. (via)

Here’s the clip of him pulling up that massive muskie on Minnesota’s Lake Lacs:

Ice fishing really is not my forte. I wish this wasn’t the case. It looks fun as hell posting up in those little sheds on the lake and drinking beer for 12 hours while cooking food and pulling up fish through a tiny 10-inch hole in the ice but I grew up in Florida and didn’t see my first frozen lake or pond until I was in like 5th or 6th grade and we took our first family trip up North in the Winter.

Growing up, I’d always spend my summers in the Adirondack Mountains with family and I’d see my cousin’s little huts sitting off in the trees and it was hard for me to ever imagine the lake being frozen enough to shove what looked like a heavy ass shed out onto the lake but they’d do it all Winter long and crush Gennessee Beer from the time they hit the ice until the time they passed out.

So what I’m really trying to say here is now that I’m a grown-ass man and can afford to get on a flight anytime I want in the middle of Winter I need one of you bros out there to plan a glorious ice fishing trip and tell me when/where I need to be so we can get hammered and catch some fish. I’ll bring the Bourbon.