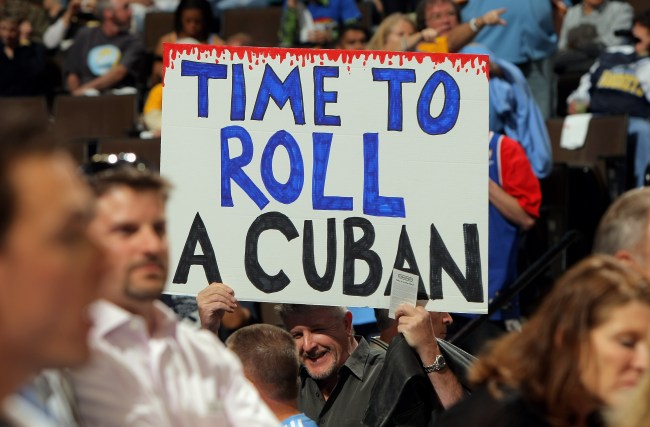 DENVER - MAY 13: A fan of the Denver Nuggets displays a sign referring to Dallas Mavericks owner Mark Cuban in Game Five of the Western Conference Semifinals during the 2009 NBA Playoffs at Pepsi Center on May 13, 2009 in Denver, Colorado. NOTE TO USER: User expressly acknowledges and agrees that, by downloading and or using this photograph, User is consenting to the terms and conditions of the Getty Images License Agreement. (Photo by Doug Pensinger/Getty Images)

The Dallas Mavericks became the 21st NBA franchise to sign a jersey sponsorship deal, agreeing to a 3-year partnership with the free local marketplace app, 5Miles. The wide-ranging partnership places the Craigslist rival’s orange logo on the team’s jersey, offers the mobile start-up signage throughout American Airlines Center and includes Harrison Barnes (team forward) as a “brand ambassador” (or spokesperson). 5Miles will also become an active member of the Mavs foundation, committed to helping with the expansion of the team’s entrepreneurial program (for DFW middle school students). Financial terms of the deal were not disclosed.

Howie Long-Short: Like Craigslist, 5Miles enables users to buy and sell products and services; the differentiator is that all transactions initiated within their app, occur within a 5-mile radius. The company is also considered an innovator in both the use and acceptance of cryptocurrency; Craigslist is anything but a technology innovator (see: website design). 5Miles has raised more than $50 million to date (all private money), including a B+ round in January 2016; a $30 million investment that valued the company at more than $300 million. Launched in ’15, 5Miles has more than 1 million users in the Dallas market (its largest market).

Fan Marino: The announcement of this partnership is the first piece of good news to come out of the Maverick’s organization in weeks. On the floor, the team is 25 games under .500; and remarkably, things have been worse off it. Sports Illustrated published an expose highlighting the “Corrosive Workplace Culture” (see: sexual harassment, domestic violence etc.) within the organization, the league fined the owner Mark Cuban $600,000 for suggesting that losing (or tanking) was in his team’s best interests and now Cuban has been accused of sexual assault. It makes you wonder if the reason financial terms were not disclosed, was because the team was forced to issue a steep discount to compensate for all the negative publicity. For what it’s worth, Cuban denied any potential sponsors pulled out of negotiations due to off-court concerns.

Dallas readers: Download the app, use the code GOMAVS and you’ll receive 2 tickets to a future home game.

Two days before the NFL and Papa John’s (PZZA) agreed to part ways, Peyton Manning chose to do the same with his stake in 31 Papa John’s franchise locations. Manning, who acquired the Denver area stores when he signed with the Broncos in ’12, will remain a company spokesperson and ambassador. The league has since announced Pizza Hut (YUM) will become the Official Pizza of the NFL, signing a 4-year deal (PZZA had 3 left on theirs) with an annual value exceeding the amount PZZA was schedule to pay. Papa John’s will retain an affiliation with the league through its 22 team sponsorship deals.

Howie Long-Short: It’s unclear just how much equity Manning had in each location, as his stake was tied up in a joint venture with Papa John’s International. What is clear, are the costs (and requirements) associated with opening a PZZA location. Franchisees must have a minimum net worth of $250,000 (for one store), with at least $75,000 in liquid assets. The franchise fee is just $25,000, but there is a 5% royalty fee on monthly net sales. Franchisees are also expected to invest 8% of monthly sales back into marketing and advertising their location. In all, the investment required to open a 1,200-1,400 SF location is estimated at $300,000. As of 2016, the company’s sales to investment ratio was $879,794.

Fan Marino: Mike and the Mad Dog set the bar for modern sports talk radio (and created radio row, if you ask Mike), hosting afternoon drive on WFAN (NYC) for more than 20 years. The pair broke up in 2008, though Mike remained on the station until late 2017. While Mike became a caricature of himself late in his career, he delivered one of his most epic monologues following Super Bowl 50. It’s an all-time favorite among the Mongos (his fanatical fan base, proud Mongo here). You MUST listen (Skip to 11:15, make sure you listen through at least 11:50).

Howie Long-Short: Formula One estimates that the sport has 500 million fans worldwide, with “conservatively” 1% of that audience considered to be a “super avid hardcore fan.” If Liberty’s estimates are correct and they can convert those “super fans” into $500 million/year in new revenue (they won’t be able to in short-term due to existing agreements with traditional broadcasters), it’ll boost the FWONK revenue 28% (generated $1.784 billion in ’17). That will be welcomed news to the teams, as the collective payment declined $47 million (to $919 million) in the first year under Liberty Media ownership. TATACOMM, which delivers 25% of the world’s internet routes, isn’t new to Grand Prix racing; the company has been the Official Connectivity Partner of Formula 1 for the last 6 seasons. Shares of the company are down 18% (to $9.40) over the last 12 months. The concern? The time frame for the company to become profitable. It will be 2019, at the earliest.

Fan Marino: Liberty has hired Brian Tyler (an all-time Top 10 grossing film composer) to compose a theme song for the sport. Assuming Tyler is being compensated, I wouldn’t classify that as a responsible expenditure; certainly, not after watching 2017 revenues decline. While Tyler will likely do a great job, who cares? Not the “super avid hardcore fan” that’s paying for the OTT service. While the decision is unlikely to make a difference to the fans, it has the teams upset; they believe Liberty should be picking up the tab on this project.