9 Days Until UFC 249: Will Dominick Cruz’ Next Comeback be his Greatest? 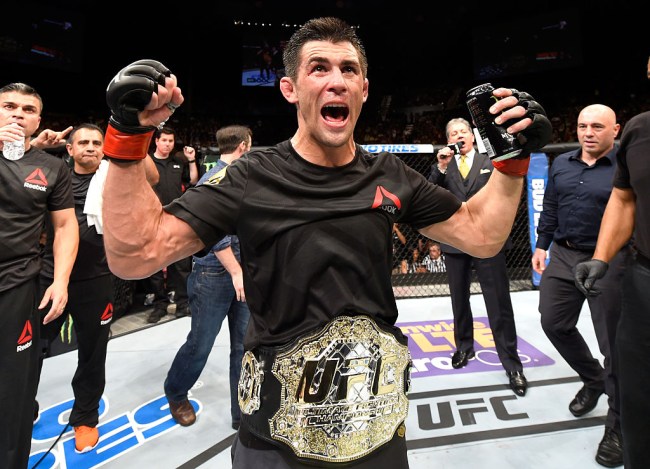 This is not just another Dominick Cruz comeback story. It’s not the definitive one either …

This is a story that provides context, however, of what Dominick Cruz is trying to do on May 9 at UFC 249, when he returns to the Octagon after a 40 month layoff to take on current champ Henry Cejudo. Cruz will attempt to capture the UFC bantamweight title for the third time, and honestly, it’s really not that far-fetched to imagine that he can complete yet another historic comeback. After all, he’s done it before. More than once, in fact.

Back in 2016, when Cruz was making his last comeback, he explained that ring rust is a myth. While many buy into the idea that time away from the Octagon can slow a fighter’s instincts or dull a normally sharp fight I.Q., Cruz has never subscribed to that notion. And who can doubt him.

However, before Dominick Cruz became known for his many comebacks, along with the injuries that kept him out of action, he was using exceptional and technical footwork, speed, boxing, wrestling, one of the highest fight I.Q.s in the game, and effective game planning to change MMA back in the late aughts. He invented a style all his own, predicated on elusive movement, offensive and defensive wrestling, feints, and deception.

Cruz became MMA’s premiere matador in a division full of running bulls, winning his first 12 fights at 135 pounds. And then, while at the height of his powers, in 2011, his career took a drastic turn, as Cruz became a constant victim of the injury bug.

First it was an ACL. Then it was the ACL again. Next it was his groin. Repeat, ad nauseum. His body was failing him.

It took a shade under three years for Cruz to complete his first comeback, absolutely steamrolling Takeya Mizugaki in a little over a minute at UFC 178. Cruz looked better than ever in 2014 and was set to fight for the title that he relinquished due to injury … but then his other ACL gave out, keeping him out of action for another year.

By January 2016, Cruz completed his second comeback, this one even more miraculous, as he dethroned then-champ T.J. Dillashaw to win the UFC title after 16 months on the shelf. Five months later, Cruz would defend the bantamweight title, before eventually dropping the belt in December of the same year. And that’s the last we’ve seen of the bantamweight G.O.A.T.

So why book him in a title fight now? Why thrust Dominick Cruz back into the limelight for a pivotal fight when he’s been away from the game for more than three years? Why did he jump the line ahead of several viable contenders?

Well, there are many answers here, and the first one is the actual name: Dominick Cruz; which has become synonymous with championship fights.

The fact is, in some way, Dominick Cruz built the bantamweight division. He was the UFC’s inaugural champion at 135 pounds, carrying the belt over from the WEC, and his rivalry with Urijah Faber brought eyes and attention to a division that many people wanted to initially write off.

The UFC has invested years into promoting Cruz and building his brand, so it definitely makes more than a bit of sense to book the biggest name in the division for basically the last decade, in a title fight. And while Henry Cejudo may be a -220 favorite, Cruz is still the bigger name in MMA.

Looking a little closer, it’s also important to explain that Cruz took the fight on short notice, filling in for former featherweight champion Jose Aldo, another fighter with a big name who earned a title shot, despite losing his most recent fight.

So, while the Cejudo vs. Aldo booking doesn’t necessarily make a whole lot of sense from a meritocratic perspective (fighters like Petr Yan, Cory Sandhagen, and Aljamain Sterling all have rightful claims to any bantamweight title shot), it makes even more sense than Cejudo vs. Aldo, and it even has a backstory.

So the legend goes, before either Cruz or Cejudo were fighting mixed martial arts, the two trained together in the wrestling room in Arizona, where Cejudo was top dog.

With Cejudo then moving on to the Olympic training center (he won a gold medal at the 2008 Beijing Games, in case he hasn’t told you yet), Cruz took to mixed martial arts, becoming a world champ for the WEC and then the UFC.

The rivalry, which started on the wrestling mat, will now move to the Octagon, and the table is set for Dominick Cruz to complete the greatest comeback of his career.

To put this comeback in more perspective, it’s important to understand that this is not only the end of the third major layoff of Cruz’ career, but the 40 months in between his last bout and UFC 249 on May 9 represents the longest stretch of any of those comebacks. It doesn’t help that he just turned 35.

Additionally, Cruz is facing Cejudo, who knocked T.J. Dillashaw out in 32 seconds. Sure, MMA math is garbage, and Cejudo beat Dillashaw at flyweight. But still, please understand that Dillashaw gave Cruz everything he could handle back in 2016 (that result was one of the closer split decisions in the modern UFC era), while Cejudo went through T.J. like a buzzsaw.

All of this is to say that at UFC 249, Dominick Cruz is not only making an attempt at history, but he’s doing it against one of the greatest combat sports athletes of all time, and perhaps his toughest opponent to date. So yeah, it’s totally a big deal, and it’s totally a fight worth watching, both for its high level action, as well as its historical context.