10 Days Until UFC 249: Is Ferguson vs. Gaethje the Best UFC Fight Card Ever? 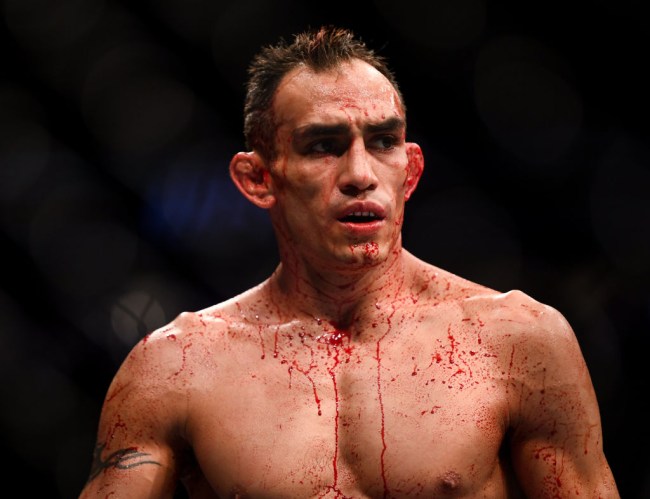 It’s been quite a while since we’ve had any sports to talk and write about — the WNBA and NFL drafts, along with that random table tennis-soccer hybrid don’t count — so let’s take a minute to take a deeper look at the first UFC fight card since March 14 because, well, it’s sort of a big deal. Plus, there’s not much else to talk about anyway.

Examining UFC 249, which goes down on May 9, it’s important to remember how we arrived here, how we migrated from an event that was supposed to take place in a sold-out arena in Brooklyn, featuring a long awaited lightweight title fight between champion Khabib Nurmagomedov and Tony Ferguson, to this new incarnation, which will take place at the VyStar Veterans Memorial Arena in Jacksonville, Florida. Not only will there be no fans in attendance, but Nurmagomedov, the world champ, won’t be there either, having been replaced by the always entertaining and always vicious Justin Gaethje.

The moves and changes: date, location, opponents; are all due to the Coronavirus pandemic, but just like UFC president Dana White promised, the UFC will be the first American sport back in action. And, while it’s not the same as the Khabib vs. Ferguson fight that everyone has been clamoring for for the last five years, the UFC 249 main event between Tony Ferguson and Justin Gaethje has the possibility to be one of the greatest mixed martial arts fights of all time, and that is no hyperbole.

As we inch closer and closer to fight night, we’ll take a more detailed look at the UFC 249 main event and these two headlining fighters who deliver nothing but incredible action inside the Octagon, but for now, it’s just fun to look at the fight card as a whole and consider where this event falls in terms of the greatest events the UFC has ever promoted.

It’s easy to dismiss a card like UFC 249 right off the bat, explaining that recency bias has corrupted any ability to accurately examine the fights. It’s also possible to write this event off because it’s headlined by an interim title fight, rather than a pair or trio of world title bouts, as often happens. However, unless COVID has already eaten away at part of my brain, I will undoubtedly stand by my claim that, on paper, this is one of the finest collections of fights and fighters the UFC has ever booked to compete on the same night. With 15 ranked fighters booked on the May 9 fight card, including six current and former champions, UFC 249 is, at the very least, the deepest event the UFC has promoted since UFC 238. Coincidentally, that is the last time Ferguson fought.

In addition to the titillating main event — seriously, Ferguson vs. Gaethje is one hell of a sexy, violent matchup — UFC 249 is co-headlined by a bantamweight title fight between current champion Henry Cejudo, who has also been out of action since last June’s UFC 238, and former champ Dominick Cruz, a fighter many believe to be the greatest bantamweight of all time.

Again, as we approach fight night, we’ll dive into the Cejudo vs. Cruz matchup, and as ridiculous as it may seem to book Cruz, a fighter who has not competed since late 2016 and is coming off of a loss, into a title fight, his body of work and legacy are cemented, so it’s not incomprehensible that he should be awarded such a high profile bout, especially given the COVID-influenced circumstances that led to this short-notice fight. Honestly, Cruz has a real shot here. And come Sunday, May 10, he very well could become the UFC’s first three-time bantamweight champion.

Originally scheduled to headline a fight card in Columbus, Ohio on March 28, Francis Ngannou and Jairzinho Rozenstruik have delayed and postponed their bout, agreeing to face one another at UFC 249. This might very well be the greatest featured bout (the third to last fight on the PPV main card) in recent memory, and it might end in a matter of seconds.

Both Ngannou and Rozenstruik are born knockout artists. They’re massive men, with enormous power, and that special touch of death that combines force and accuracy in a way where opponents just fall by the wayside from a single, seemingly effortless punch.

With Ngannou inching closer to a second title shot, the undefeated Rozenstruik made the bold move to call out the most feared man on the UFC roster for a title eliminator. It’s exactly the type of fight that fans want to see because of the expectation of a violent knockout, and both Ngannou and Rozenstruik appear willing to oblige and trade fists for as long as they can sit down in the pocket and throw heavy, heavier, and heaviest hands.

Have we ever seen a more powerful heavyweight!? 💪🤫 @FrancisNgannou #UFC249

It’s a badass fight, no doubt, and the most anticipated heavyweight bout until champion Stipe Miocic returns from injury.

Well, just before Ngannou vs. Rozenstruik, a pair of lethal featherweights will go at it, as longtime UFC veteran Jeremy Stephens faces ninth-ranked Calvin Kattar. That’s one hell of a sweet fight between two guys who have speed and power, and like to pressure forward and bring the action.

There’s also another heavyweight bout, between Yorgan de Castro and ex-NFL defensive lineman Gregy Hardy, to open the PPV main card, but just before UFC 249 switches over to its Pay Per View portion, there’s an intriguing welterweight fight between a pair of UFC legends, as Donald “Cowboy” Cerrone faces Anthony “Showtime” Pettis in a rematch of their 2013 affair.

Returning to action after his sub-minute loss to Conor McGregor at UFC 246, Cerrone is in the midst of a three-fight losing streak. He’s nearing the twilight of his storied career, which includes a number of UFC records, for things like fights, wins, stoppages, and performance bonuses — really important records — and this fight against Pettis could be a great chance at redemption, after losing their first fight via body kick.

Any time. Any place. Your @ESPN prelim main event! #UFC249

The Cerrone vs. Pettis bout is intriguing for so many reasons, not just because of their names, but also because of the stylistic matchup — both Cerrone and Pettis prefer to stand and trade strikes, but both have exceptional ground games as well — and the change in weight class.

Will welterweight benefit Cerrone? Or will the extra weight help Pettis, who has proven to have knockout power at 170 pounds?

As Cerrone and Pettis will square off on the UFC 249 prelims, their fight will be available on both ESPN and ESPN+ (both platforms will broadcast the UFC 249 prelims), which is also a huge win for fans and anyone looking to dabble in the fight game, without shelling out the cashish for the PPV. It’s a wicked fight, and it’s “free” on cable and streaming.

These are not the only fights of note on the UFC 249 card. Almost every fight has some intriguing storyline or compelling stylistic element. Heck, even the early prelim headliner between Vicente Luque and Niko Price (which will also be broadcast on ESPN and ESPN+) is required viewing for fight fans. Seriously, the whole card is stacked.

Of course, there’s no way to fully erase the sting of losing Khabib vs. Ferguson for the fifth time, but Dana White has done a rather admirable job with UFC 249, cobbling together a fight card that, on paper, can stand alongside mega events like UFC 205, UFC 245, UFC 200, UFC 100, and UFC 189. Perhaps only UFC 217 had a stronger lineup of fighters, and that card was more top heavy, with three title fights. UFC 249 has a deeper resume of quality and ranked fighters, and it certainly has the potential to be one of the greatest nights in MMA history. Or does it?