How to Properly Grieve the UFC 249 Main Event: Slowly Coming to Terms with and Finding Meaning in Another Khabib vs. Ferguson Cancelation 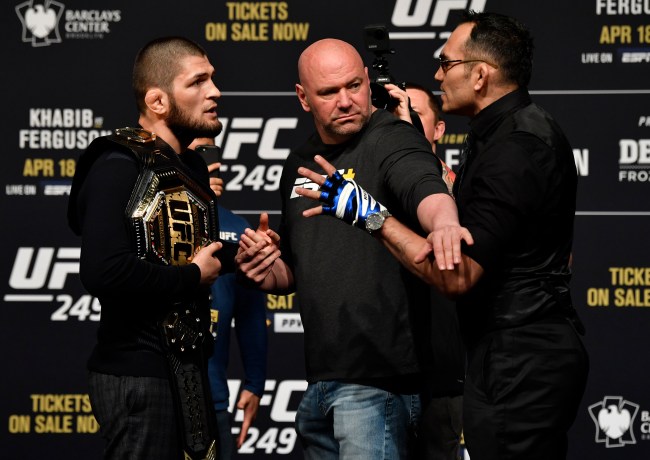 Irony doesn’t even begin to register in a case like this. It feels like a really cruel joke, doesn’t it?

The UFC 249 main event between Khabib Nurmagomedov and Tony Ferguson has been canceled, and right now, amid the Coronavirus pandemic, amid the self-quarantine, amid the isolation, I’m somewhere between bargaining and depression.

What I’m feeling at the moment is grief, and it’s likely that MMA and UFC fans are feeling the same. It’s difficult to assign such a deep and academic approach to fight fandom. It seems trivial at a time like this. However, this is the fifth time a Nurmagomedov vs. Ferguson bout has been scratched, and I’ve processed all of these emotions before: numerous times. It’s definitely grief.

The story of Khabib and Tony so far… pic.twitter.com/B4Bq4hqIf9

Examining the five stages of loss, it’s evident that with every ensuing Khabib vs. Ferguson cancelation, the symptoms of grief grow.

Back in 2015, when their first bout was canceled, I felt a bit of denial. At the time, I was preparing to visit Las Vegas to watch that bout live at the Cosmopolitan. And while I didn’t want to admit that the highly-anticipated fight was off, outright denying that something I was emotionally invested in was cancelled, there was no bargaining. However, there was a slight tinge of depression, not to mention a hint of anger.

At the time, I had sat cageside for the five previous bouts on Ferguson’s now-historic win streak. I was covering his run to the title for a number of publications, even visiting his training camp in Orange County, C.A. at one point, and I more than a bit heated that the bout was off.

Still, I processed the anger and quickly jumped to acceptance, as Ferguson managed to erase any inklings of remorse with an incredible submission win over Edson Barboza, who filled in for Khabib that night.

A few months later, is when the bargaining began to hit.

“The guy does not want to fight. He’s scared, he’s running, he should be stripped of his title.”@TonyFergusonXT gives @arielhelwani his reaction to Khabib's apparent withdrawal from #UFC249 on @SportsCenter pic.twitter.com/B1Sx2gPQq6

With Ferguson pulling out of the second Khabib bout just 11 days before they were set to fight in Florida in 2016, I was heated at the cancelation, but not like the first time.

See, there was no way I was willing or able to travel to Tampa Bay at the time, so I was already in a frame of mind perfectly suited for acceptance; however, the bargaining started immediately. How could the fight be canceled a second time? Was Tony okay? Who would Khabib fight? And, who the hell was Darrell Horcher?

Less than a year later, denial and anger crept back into my grieving psyche. Again, it was directly related to Khabib and Ferguson.

I guess that fight is officially cancelled… Again 😢 #UFC249 pic.twitter.com/CZc1cuQEOI

Having finally watched a Khabib fight in person, witnessing his brilliant, dominant, and downright scary domination of Michael Johnson at UFC 205, I was all in on the Nurmagomedov vs. Ferguson interim lightweight title fight that was booked for UFC 209 in March 2017.

Again, I made plans to attend the fight live, and while the previous cancellations had left me numb to the possibility of Khabib and Tony ever fighting, there was no way I would miss this title fight, especially in Las Vegas. This was going to be a big time MMA and UFC moment. A new (interim) king would be crowned, and the winner would likely go on to face Conor McGregor, who was at the pinnacle of his champ-champ era. Only it didn’t play out like that.

With Ferguson cleared to fight, making the 155-pound limit on weigh-in day, Khabib was whisked away to the emergency room and hooked up to an IV, which was in direct violation of the UFC and USADA’s anti-doping protocol.

Nurmagomedov, who was in Las Vegas for all fight week activities, never made it to the scale, and the fight was axed, again.

Hearing the news, I couldn’t believe it. No way. No how. Someone was yanking my chain … except they weren’t.

"I am Khabib. I am not coronavirus."

Nurmagomedov took to Instagram Live to lay out the details of his travel to Russia and express frustration with what he believes is misplaced blame about the status of his fight with Tony Ferguson. (via @TeamKhabib) pic.twitter.com/xRR5zxPLAE

I continued to deny during the entire 270-mile drive from LA to Vegas, and I may, or may not, have punched the steering wheel more than a few times out of sheer anger.

Coping this time around was particularly hard, and the UFC 209 main event, a rematch between then-champ Tyron Woodley and Stephen “Wonderboy” Thompson, did little to squash my feelings of anger. It was only after the event, while walking nearly the entire length of the Las Vegas Strip, from the T-Mobile Arena all the way to Circus Circus, amid a handful of High Life tallboys and edibles, that I found some solace.

Hey, there would have to be a next time. Wouldn’t there?

Taking some time to grieve yet another Khabib vs. Tony cancellation, I was not the least bit shocked when, just days before UFC 223, I woke up in a Mexico City AirBnB rental to another announcement.

With Khabib and then-interim champ Ferguson set to fight for the undisputed title in April 2018, UFC president Dana White took to social media to deliver a very sad message. Ferguson badly injured his knee during a routine fight week media opportunity. It was a freak accident and a legitimately horrible injury.

At this point, how could I even deny that this was a possibility? Sure, it was April Fool’s day, but Dana wouldn’t joke about that. Would he? And how could I be angry, when Ferguson was dealing with a torn fibular collateral ligament?

Dana, of course, tried to bargain, briefly slotting Max Holloway into the narrative, but weight issues nixed that fight, and that’s how we ended up with Khabib vs. Iaquinta, a bout that was not necessarily depressing, but felt like a less-than-adequate replacement.

Another memorable message was sent today in the bitter Conor-Khabib rivalry ✉️ pic.twitter.com/Lere452n84

Honestly though, that whole week was kind of a blur after McGregor stormed the Barclays center with his crew and tossed a dolly cart into a bus window. Remember that one?

And all of that leads us here, to UFC 249, Khabib vs. Ferguson 5, as it shall henceforth be known …

By this point, UFC and MMA fans, followers, media, and anyone remotely linked to combat sports and the fight game has been through the rollercoaster of emotions that accompany the loss of yet another Khabib vs. Ferguson fight. However, even these years of experience can’t make the denial, anger, bargaining, depression, and acceptance go away just like that.

We want to deny that this is happening again. How could it be? Or could it only be? Perhaps we’re really in some permanent state of denial, and this fight is just not in the cosmic cards, in this lifetime, or the next.

We’re angry. Why couldn’t the UFC book this fight for January, February, or March? Both Khabib and Tony have been off since last September and both have been healthy, so what took the UFC so long to book the most anticipated lightweight fight in history? Was Khabib vs. Ferguson and some clarity in the lightweight division not enough of a priority for the UFC to book in the last three months?

It’s a justification, of course, creating a false timeline wherein Khabib vs. Ferguson happens before the Coronavirus put the entire world on pause for the foreseeable future.

This brings us to the bargaining stage of grief, which is currently in full effect.

“Now, about that private jet to get the fighters to the venue …”https://t.co/kQevmxdRJL https://t.co/vl3qdDmzzR

With Khabib announcing his intention to remain in Dagestan throughout Russia’s current lockdown, there were reports that he could just fly out, on a whim, in a private jet, to an undisclosed location, evading all Russian authorities.

Then, Justin Gaethje was announced as a potential replacement to fight Ferguson on April 18, which was followed by new rumors that Conor McGregor will take the fight, which falls perfectly in line with yet another “Mystic Mac” prophecy, in which he has stated that either Khabib or Ferguson would not make it to fight night.

Both the Gaethje and McGregor matchups would be great. They would. There is no denying that. But it feels like a bait and switch at this point.

But that’s not necessarily what is going to happen, and that’s depressing honestly.

Imagine, after five years of booking and cancelling, there’s a chance that Khabib and Ferguson may never meet inside the Octagon. That’s a terrible, terrible waste of two of the greatest MMA fighters on the planet, one of whom is in his prime and the other nearing the end of his physical peak. Yes, depressing feels like an accurate descriptor here.

And then there’s acceptance …

Truthfully, honestly, I don’t want to accept that Khabib vs. Ferguson is off for the fifth time. Realistically, however, I’ve already made peace with it.

In the wake of the current worldwide COVID-19 outbreak, there are clearly things that are way more important than an MMA title fight. Public health, family, welfare, employment, and the economy all stick out as major priorities during this time of doubt and uncertainty.

There’s no question where priorities should be at a time like this, and they shouldn’t be centered on MMA, the UFC, or sports at all. But herein lies the crux: a big fight at a time like this could give millions of fans around the world a few hours of respite from the constant news cycle that centers on death and sickness, not to mention this fire sale of a primary season.

And, as controversial as the decision to continue on with UFC 249 has been, there remains the possibility that it comes from a place of good intention … well, good intention and money, but still, at its core, UFC 249, in some examination, could be considered a sign of perseverance, courage, leadership, strength, and individuality, all of which are intrinsic traits of UFC and MMA fighters.

Denial. Anger. Bargaining. Depression. Acceptance. They all add up to grief, and that’s exactly what we’re experiencing right now. It doesn’t help that this grief is greatly compounded by the isolation and loss we’re all experiencing during the Coronavirus pandemic, but it is legitimate, and it is still tough to come to terms with.

So, own your grief. It’s a tough pill to swallow, but it’s nothing that we can’t rebound and recover from, and in this healing, we can begin to understand a deeper meaning, which, according to David Kessler, the world’s leading expert on grief, should be considered the sixth stage in the cycle.

What that meaning is right now is tough to imagine. It’s tough to contemplate why the MMA gods would do this, why they would intervene in a star-crossed fight, rendering it as destined to fail.

But there is some meaning. There must be. And only time and patience will reveal what that hidden meaning really is.