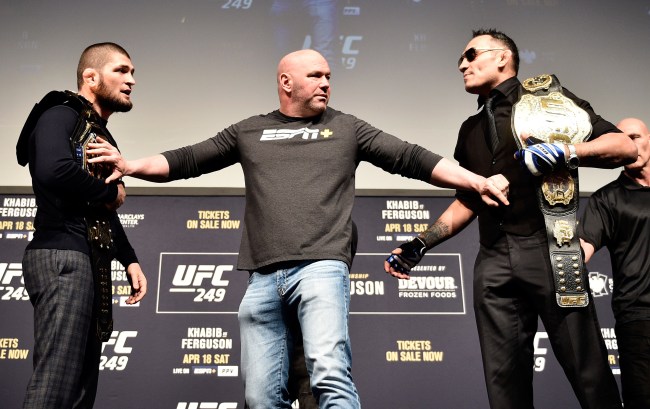 What was it that Joe Rogan said about UFC 249 when he announced that he wasn’t going anywhere near it? Oh yeah. It, and the Khabib Nurmagomedov versus Tony Ferguson fight, are cursed.

On Wedensday, Nurmagomedov announced that he too would be skipping UFC 249, making this the fifth time his long-long-long-anticipated fight vs. Tony Ferguson has been postponed.

Khabib’s announcement came just hours after Russian news outlets stated that he would be allowed to fly in a private plane to America for the fight, despite the restrictions currently in place due to the pandemic.

“For Khabib to be allowed to fly to the US on a private jet, the flight company whose services he intends to use, should obtain a permit for flying out of Russia and for arrival in the USA,”

Russia’s Federal Air Transport Agency confirmed that this was, indeed, the case.

“There are currently no restrictions on business aviation from Russia. Upon the availability of approval, the aircraft will be able to fly to the US,” stated a report published by Sport-Express.

Despite that opportunity, Khabib decided to err on the side of caution.

“Staying home in quarantine and reading the reaction of people to the situation around my fight, it turns out that the whole world should be in quarantine, governments of all countries, famous people around the world urge people to follow all safety requirements in order to limit the spread of the disease, to save people, and Khabib is the only one relieved of all obligations and must demonstrate free will and train flying around the world, for the sake of fight?” Nurmagomedov wrote on social media. “I understand everything and I’m definitely upset more than you to cancel the fight, probably like all others, I had many plans after the fight, but I can’t control it all.

“The greatest countries and the largest companies of our time are shocked by what is happening, every day the situation changes unpredictably. But Khabib still has to fight, is that what you saying? Take care of yourself and put yourself in my shoes.”