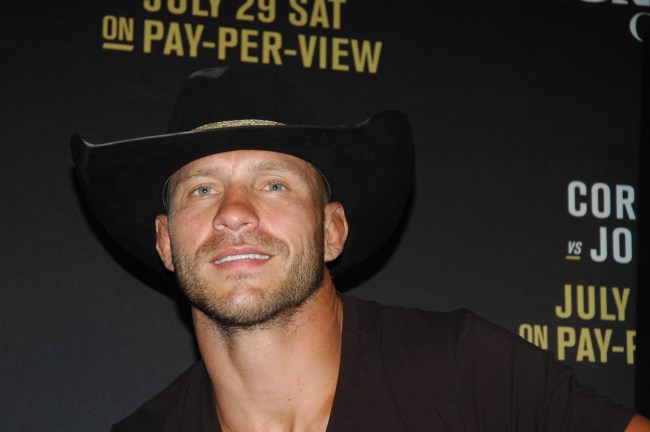 By now you’ve all heard that “The Notorious” Conor McGregor is finally returning to the Octagon. The most famous MMA fighter of all time, McGregor is making his comeback, this Saturday, January 18, headlining the UFC 246 Pay Per View main card on ESPN+.

But who’s the guy standing opposite McGregor on all the posters, the fellow who looks straight out of any number of western movies or rodeo ads? Well, that’d be Donald “Cowboy” Cerrone folks, and if you don’t know him yet, it’s time to study up on one of the most decorated mixed martial artists of all time.

For those of you who are just finding your way to MMA and the UFC through McGregor’s meteoric rise and bright shining star, Cerrone may just be another name, a B-side slapped on the other side of the marketing material, a warm body for “The Notorious” to beat up on in his comeback fight. However, those inside the combat sports bubble have known for quite some time what kind of fighter “Cowboy” is. He’s an absolute legend, and one hell of a striker, with some pretty bad ass submission skills to boot.

Tied for the UFC’s all-time record in bouts, “Cowboy” Cerrone stands alone in the UFC record books when it comes to wins and finishes. He also has the UFC record for most career knockdowns with 20, and even more impressively, he’s the UFC’s all-time leader in fight night bonuses, racking up a whopping 18 bonus checks for his Knockout, Submission, Fight, and Performance of the Night efforts.

Debuting in the UFC in 2011, after parent company Zuffa disbanded the WEC and absorbed the top talent from 155 pounds and below, Cerrone has become one of the most popular fighters in the UFC, not only because of his fighting style, which centers on kickboxing, but includes trace amounts of Brazilian Jiu Jitsu and wrestling, but also because of his extreme lifestyle, which includes all sorts of hunting, wakeboarding, and motorcycling exploits.

Cerrone, who hails from Colorado, but is based in New Mexico, is the UFC’s original BMF. That’s right. Before Jorge Masvidal and before Nate Diaz, it was “Cowboy” who built his own BMF ranch on the outskirts of Albuquerque, adopting a mantra of “anyone, anytime, any place.”

And he’s always lived up to that credo.

Cerrone is a different type of beast than every other fighter in the UFC. He’s a unique character.

Rather than fly to fights like everyone else, “Cowboy” prefers to take is RV, even if it means paying exorbitant fees to drive into New York City and pay to park overnight. The motorhome also routinely doubles as Cerrone’s accommodation on fight week, which is a far cry from the casino hotels and luxury suites where most fighters crash.

And then there’s the trailer full of Harley Davidsons that he hauls across country so that he can go on late night rides with his team down the Las Vegas strip. “Cowboy” also occasionally packs a few wave runners into the trailer, or some sort of water based gear so that he can at least hit up Lake Mead for some wakeboarding.

In some ways, the fight is the least dangerous part of Cerrone’s life.

Having never won a UFC title (he fought for the lightweight belt in 2015, losing via first round TKO), Cerrone has compiled a hall of fame resume, with or without a belt. In addition to his plentiful records and accolades, he’s also fought the toughest guys in the UFC, names like Diaz, Masvidal, dos Anjos, Anthony Pettis, Eddie Alvarez, Edson Barboza, Darren Till, Tony Ferguson, Justin Gaethje, Benson Henderson, and Robbie Lawler. No one in the UFC has ever fought such a collection of competition. NO ONE!

And then there’s the good ole’ boy in him, the red blooded American who’s currently featured on a limited edition Budweiser can this UFC 246 fight week.

Despite the fact that the UFC already has an official beer sponsor, “Cowboy” is so popular that the folks at Anheuser-Busch tossed his face and records on the side of beer can. It probably doesn’t hurt that Cerrone actually used his longtime affiliation with Budweiser to court the McGregor fight, positioning his love for American beer against McGregor’s own Proper Twelve Irish whiskey brand.

Conor McGregor himself mentioned that the social media tactic definitely made the “Cowboy” fight more appealing as he was deciding against whom to make his comeback.

And beneath all of the MMA skills, and extreme sports, and beer drinking, is Donald Cerrone, the vulnerable and raw human being.

Honestly, it’s quite rare for civilians to find real ways to relate to professional athletes, in particular MMA fighters, but Cerrone has a certain appeal for the everyman. He’s never afraid to be honest and open with his feelings. He brings a sincere touch to the combat sports world, that is full of over-the-top figures and wild characters.

Sure, it’s not like the average MMA fan is gonna start living in an RV and base jump their way to work, fist fighting in a cage, but “Cowboy” Cerrone has a way to make the whole experience to relatable to the ordinary fan. He has such a true joy for the fight, the game, the training, and the lifestyle, that it’s impossible to deny his authenticity.

So, when looking at the UFC 246 PPV main event on ESPN+, it’s not as if Conor McGregor is showing up to clobber some jobber into the afterlife. He’s taking on the “Cowboy,” one of the most accomplished and entertaining fighters of all time. It makes him the perfect foe for McGregor because as many people want to see “The Notorious” win on January 18, there will be just as many hoping to see the Irish MMA phenom lose, and it’s easy to get behind “Cowboy.”