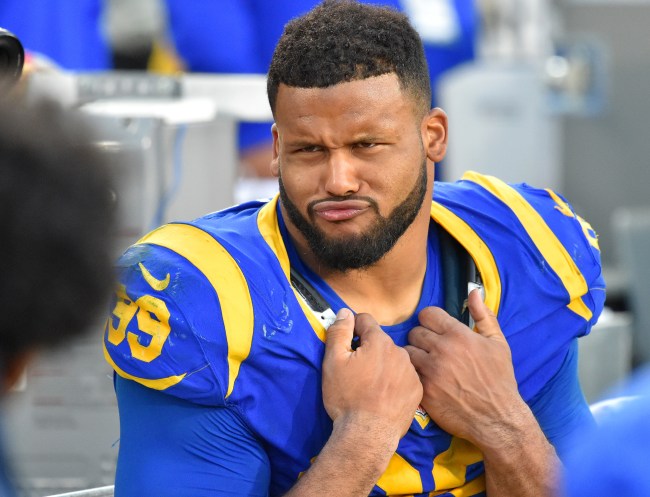 Aaron Donald is an absolute tank; there’s just no other way to put it. The defensive tackle for the Los Angeles Rams has been a two-time NFL Defensive Player of the Year thanks to his rare skills, but the dude has clearly worked his ass off in order to be in the best shape possible to make sure he dominates.

Here’s the think about Donald, though: When looking at him, he’s so much leaner than other players at his position, who are usually big ol’ fat dudes that aren’t capable of combining a bull rush with a lethal spin move mixed with pure power to get to both the quarterback and running back in the backfield. It’s what separates Aaron Donald from nearly every other defensive player in the league, because offensive lineman aren’t used to going up against a guy who resembles a slim linebacker in the trenches.

Given Donald’s workout routine, it shouldn’t come as a major surprise that he’s more shredded than the average NFL player. But seeing this recent image of him with a Pro Bowl running back, James Conner, proves just how differently build the L.A. Rams defender is. Seriously, look at how scrawny Conner looks in the photo below.

For comparison’s sake, just look at another elite NFL defensive tackle’s physique, Fletcher Cox, who doesn’t seem to have the same sort of fitness routine, genetics and raw talent that Aaron Donald has — and he’s still a serious game-changer. It’s wild to see the difference between the two, and how they both work for each guy.

Uh, yeah, no wonder Donald’s, arguably, the best defensive player in the NFL — because nobody stacks up to his once-in-a-generational combination of size, speed, power and nonstop motor on the football field. Look out, NFL offenses, because the dude looks like he’s hungry for a big season in 2020.