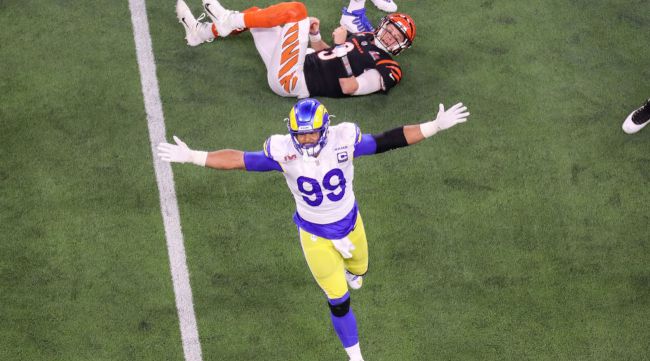 During a recent interview with Peter King, Los Angeles Rams defensive lineman and future Hall of Famer Aaron Donald revealed that a scuffle with Cincinnati Bengals signal-caller Joe Burrow early in the second half is what ultimately “woke” the dominant offensive lineman up.

“Actually, Burrow was the one, he looked at me, like, ‘Hey Aaron, that was a clean play.’ The quarterback told me that! I feel everybody start pushing me, hitting me. I almost lost it,” Donald told Peter King.

Ultimately, Aaron Donald and the Los Angeles Rams defeated Joe Burrow and the Cincinnati Bengals in Super Bowl LVI by a score of 23-20. The victory was sealed thanks to a big play by Donald, who tackled Burrow behind the line of scrimmage on a game-clinching 4th-and-1.

Donald, who had previously teased that he was considering retirement, has since announced that he will be returning to play for the NFC and Super Bowl champions next season.

Currently, sportsbooks have the Cincinnati Bengals tied with the San Francisco 49ers with +1400 odds to win next year’s Super Bowl, which makes the AFC North champs one of the top six favorites to lift the 2022-23 Lombardi Trophy. Ahead of the Bengals are the Kansas City Chiefs, Buffalo Bills, Dallas Cowboys, and the defending champion Los Angeles Rams, who boast odds of +1000.

RELATED: The Cincinnati Bengals May Have Been Screwed By Referees For Failing To Call Aaron Donald Offside On 4th-And-1