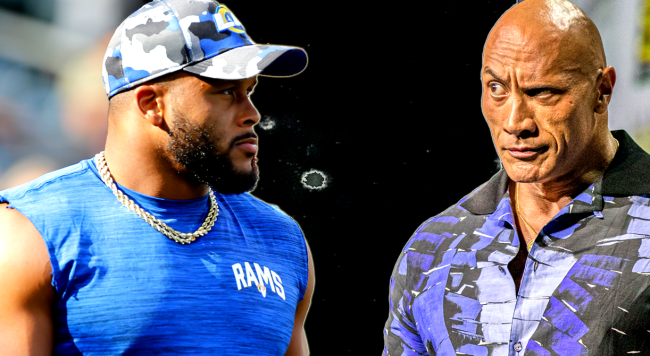 Just when you think Los Angeles Rams defensive star Aaron Donald couldn’t be any more scary, photos and videos emerge showing him working out and lifting weights with none other than Dwayne “The Rock” Johnson.

Donald’s Rams kick off the NFL season Thursday night in a match-up against the Buffalo Bills and the three-time Defensive Player of the Year looks like he is more than ready for the game.

As the Rams’ social media accounts state, it’s a “bad day to be a weight” with these two hooking up in the gym.

The Rock will also be revealing a new trailer for his upcoming superhero film Black Adam during Thursday night’s tilt between the Rams and Bills.

Speaking of superheroes, this video of The Rock and Aaron Donald talking about how their dads influenced them and how hitting the gym does so much both mentally as well as physically for each of them is like something straight out of a movie.

If that doesn’t inspire you to hit the gym, nothing will.

And if that doesn’t frighten the hell out of offensive linemen throughout the NFL, the same applies.

NFL fans had some wild reactions to seeing these two behemoths chopping it up and pumping iron together.

These 2 will probably break every machine in there 😂😂
Get them gains!! 💪🏾💪🏾

Imagine running into these two at the gym!

Fck, I hate Donald for what he did to us in the SB, but this is pretty dope.

Hard to hate it, that’s for sure.

@TheRock look like an average big guy next to @AaronDonald97

Don’t let a weight fall on him, he might start throwing them

In related news, the fight between the Cincinnati Bengals and Los Angeles Rams that saw Rams star Aaron Donald swinging a helmet at Bengals players now has the NFL looking to take over joint practice discipline.

It’s “already on the winter agenda,” according to one league source.