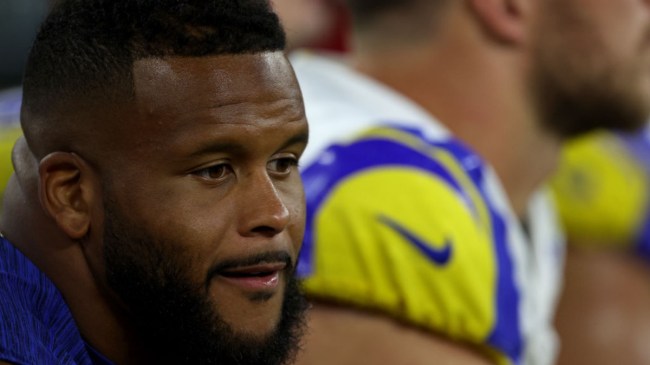 Over the course of the NFL’s preseason, fights during joint practices seemed to be a regular occurrence, but one fight in particular wound up standing out from the rest.

That fight was the fight between the Cincinnati Bengals and Los Angeles Rams that saw Rams star Aaron Donald swinging a helmet at Bengals players.

Aaron Donald gets thrown to the ground. pic.twitter.com/AKOHUzEZPU

Following this incident, there were many football fans who expected to see Donald suspended for his actions, especially given the fact that Myles Garrett served a lengthy suspension for a similar incident in 2019.

There was just one issue. The NFL doesn’t handle discipline for incidents that occurring during practice, even joint practices. That left the Rams to handle Donald’s discipline internally.

That may not be the case for incidents like this in the future. According to the Washington Post’s Mark Maske, the NFL is considering taking jurisdiction of discipline for incidents during joint practices.

The NFL "absolutely" will consider taking jurisdiction over potential discipline of players for actions during joint practices in training camp, source says, under the same system currently used for on-field discipline during games.

The issue is "already on the winter agenda" for the league, the source says.

Donald is lucky that the NFL wasn’t in control of his discipline this preseason as he’d have likely been serving a suspension of some kind and that should have been what happened here.

It never made sense for the NFL to leave teams in control of discipline for these joint practice incidents and it’s smart of them to take steps to make sure they are able to take control of these situations in the future.