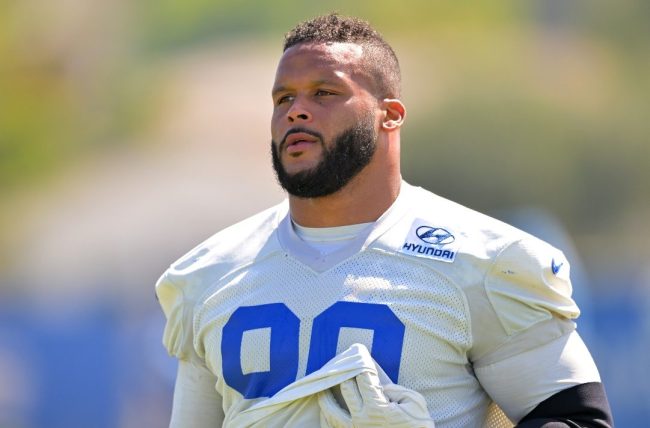 We have another joint practice fight with the 2022 NFL season right around the corner between the LA Rams and Cincinnati Bengals. The two teams have been practicing together throughout the week in preparation for their final preseason game. However, things took a turn when Aaron Donald was seen in the middle of the scrum swinging a helmet violently and getting tossed to the ground.

A quick clip shows the skirmish, as both teams collide in the middle of the field. At first, we can only see a Bengals helmet raised above everyone and clashing down upon someone’s head. Near the end of the video, Aaron Donald is clearly seen being the culprit swinging the helmet before getting manhandled to the ground. Check out the video below.

Aaron Donald gets thrown to the ground. pic.twitter.com/AKOHUzEZPU

The last time we saw someone swing a helmet was Myles Garrett attacking Mason Rudolph. It resulted in an indefinite suspension, in which Garrett sat out for the remainder of the season. Although this fight happened during a Rams-Bengals practice, it’s hard to believe the NFL doesn’t dish out a punishment for Aaron Donald for to star the 2022 NFL season.

That of course is speculation for now. Even so, Donald has to control his attitude. We’ve seen him get in the middle of scrums before but nothing quite like this. The reason the fight broke out is unknown for now, but we’re sure more information will come to light. For now, keep tabs on Aaron Donald as he has some explaining to do.