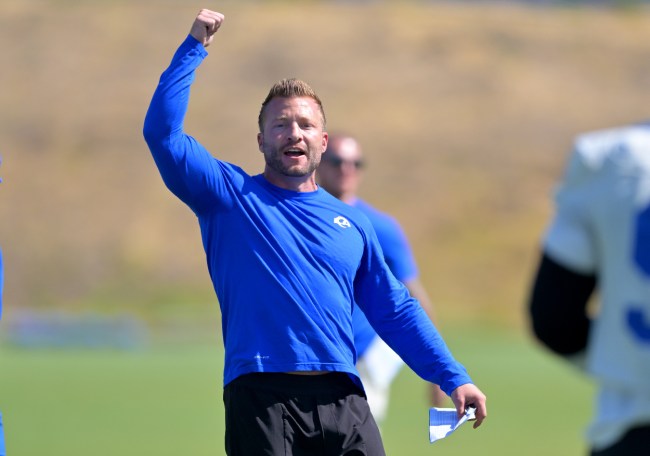 The Los Angeles Rams are clearly ready for the upcoming season, as the franchise aims to secure a second Super Bowl win in a row. It will be a long journey to repeat, but luckily for LA, Sean McVay is not retiring after he declined TV jobs in the offseason. Now, the star head coach reveals why he chose to remain with the organization.

According to The Athletic, McVay simply isn’t ready to move on from coaching. This is great news for the Rams, especially considering the franchise is a true title contender. Although he was likely getting offered the big bucks to commentate on games, Sean McVay is here to stay in LA.

Sean McVay made no secret that he was being pursued by TV networks. But ultimately, he chose to remain with Los Angeles.

"This offseason has really reminded me of what I love so much about it."@jeffphowe sits down with the Rams head coach:https://t.co/j7dBu36IUG pic.twitter.com/oNQ35xH4RA

And who can blame him? The Rams had another strong offseason as the front office acquired Allen Robinson and Bobby Wagner. Not to mention, they also signed Aaron Donald to an extension after he said he’d retire. Thank goodness Sean McVay and Matthew Stafford met at the same resort a couple of off-seasons ago, as that trade drastically changed the direction of this franchise.

Los Angeles is an early favorite out of the NFC West. The roster is completely stacked as the Rams have the talent to compete with anybody. Additionally, the front office has pooled together a great coaching staff, as Sean McVay has been lights out since his arrival.

Look for LA to make noise in the 2022 NFL season, as the Rams aim for a repeat. If they can do that, perhaps Sean McVay will ponder retiring and taking a TV job next offseason. Based on the trajectory of this organization, it’s going to be incredibly difficult to convince McVay to leave Los Angeles.