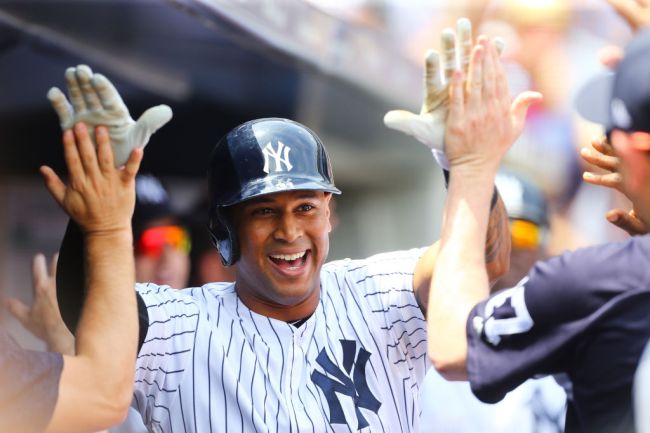 Aaron Hicks is known for hitting bombs for the New York Yankees, but for those that don’t know, the man can swing a golf club too. The 31-year-old isn’t just one of those professional athletes that simply gets around the course and hits an impressive shot here and there, no, Hicks can flat-out play. There may not be any better proof of that than hitting a hole-in-one on a Par 4, as he did over the weekend.

He has 88 home runs in the MLB, so it’s no surprise that the driver is the most deadly weapon in his golf bag. We’ve seen Hicks hit a golf ball over the net at TopGolf, but Roger Steele gave viewers an inside look at just how hard this man hits a golf ball. Steele’s recent video shows Hicks carry a driver 348 yards with 197mph clubhead speed and 132 mph ball speed. Those numbers are absurd.

Hitting a golf ball over the net at TopGolf and posting huge numbers on Trackman is one thing, but translating that sort of stuff onto an actual golf course is another. It turns out that’s no problem for Hicks either as he made a hole-in-one on a 303 yard Par 4 at Silverleaf Country Club in Arizona on Sunday. We already knew that driver would be too much stick for a 303 yard hole, so Hicks pulled 3-wood off the tee. The man carded an ace on a hole over 300 yards with a 3-wood.

Tiger Woods’ niece Cheyenne Woods just posted this video of Aaron Hicks after he made a hole-in-one on a 303-yard Par 4 😳 pic.twitter.com/dqBsbZLFto

Step aside Steph Curry and Tony Romo. We need to see Hicks tee it up in a professional event with a sponsor exemption ASAP.

The AT&T Pebble Beach Pro-Am would be a great spot to see Hicks tee it up, but unfortunately, that tournament is awfully close to the start of Spring Training so it may be tough to swing. Nevertheless, if Hicks keeps popping up on social media doing these sorts of things with a golf club in his hands, it’s only a matter of time before we’re watching this guy tee it up on television.