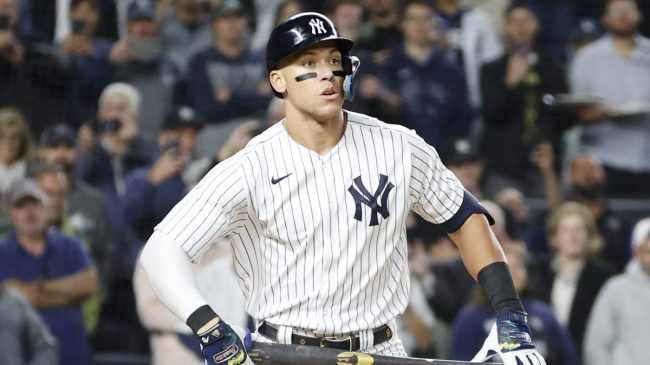 Aaron Judge is currently in the midst of one of the greatest seasons in MLB history. The Yankees star leads the American League in all three triple crown categories with a .316 batting average, 60 home runs and 128 RBIs.

But it’s the home run number that catches everyone’s attention.

Some even consider Maris’ 61 homers to be the true home run record as Barry Bonds, Mark McGwire and Sammy Sosa were all implicated in baseball’s steroid scandal.

Those “some” would be wrong, but that’s what they’re saying.

Nevertheless, the chase for 61 and then soon after 62 has led many to ask one question: what would they trade in exchange for the famous home run balls?

Batting Around: If you caught Aaron Judge's 62nd home run, what would you ask for in exchange for the ball? https://t.co/Ff7OdQSJ4X

Some of the answers were pretty strange.

That he endorses my hot dog eclairs by eating one during the postgame https://t.co/yXLoO2z7Zo

A pig every month and two comely lasses of virtue true. https://t.co/5xvjUH2Gw5

Though the weirdest one by far came from noted dork Darren Rovell.

1. Judge’s bat used for the home run, inscribed by Judge

2. One of the jerseys worn by Judge, inscribed by Judge.

3. A hard ticket to the game, inscribed by Judge

Okay, maybe it wasn’t the weirdest one…

… the first four answers would probably get me in Twitter jail https://t.co/fpJYoxsdpK

Get the gps coordinates of Chris Jericho’s wife’s cellphone on Jan 6th. https://t.co/zDwOA5uJ0t