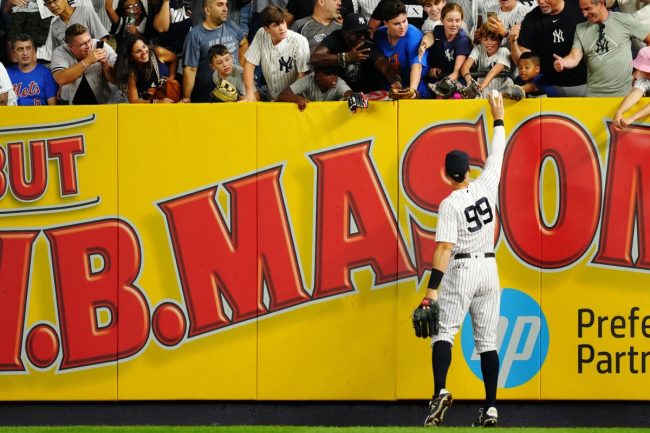 A New York Mets fan is going viral after being seen trying to heckle Aaron Judge and the Yankees faithful.

The Yankees took on the Mets in the Subway Series this week as they looked to avenge a two-game sweep at the hands of their rival earlier in the year. They did just that, landing a pair of 4-2 victories in the Bronx.

The Bombers were led by superstar slugger Aaron Judge, who smacked his 47th and 48th home runs on the season over the two-game set. One of those blasts silenced an annoying fan that was attempting to heckle the hitter and rile up the home crowd.

This fan tried to start a “Let’s Go Mets” chant during Judge’s at-bat, and it ended so poorly. Not only was he trying to taunt Yankee supporters, but he then set his sights on their beloved right fielder.

You can’t make it up… Judge homers 🤣 pic.twitter.com/PLV8coA4xg

After being berated with a flurry of boos, the fan looks up to see Judge walloping a mammoth shot to deep left field. While you can’t see it in the video, this is what the fan saw right around the time he yelled, “Here comes strike three!”

It’s not the first time we’ve seen this type of thing from Judge. In an earlier matchup against the Orioles, the slugger bashed a 460-foot drive that shut up a Baltimore heckler.

Maybe he’s fueled by the hate.

Whatever the case, he seems to be back on track after struggling through a bit of a slump. He and the Yankees hope to push for the top spot the AL playoff picture as the second half of the season winds down.