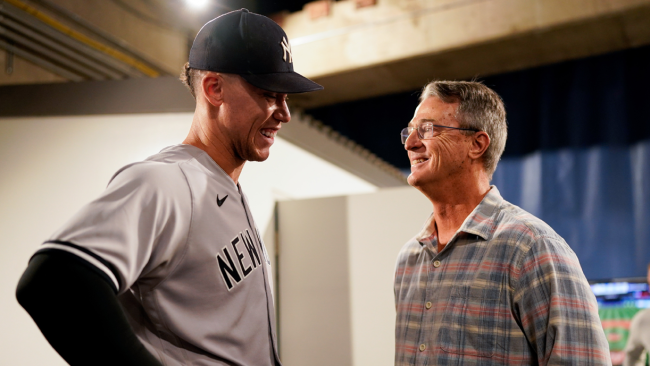 One thing all baseball fans can universally agree on is the fact that Aaron Judge tied the American League record for the most home runs hit in a single season when he hit number 61 Wednesday night.

However, there is still a whole argument now taking place among fans about whether or not Aaron Judge just tied the “real” Major League Baseball single season home run record or if the record rightfully belongs to disgraced slugger Barry Bonds.

No sooner did Aaron Judge belt home run number 61 then many publications and websites stirred the pot by asking that very question. Or, well, answering it for themselves.

That right there is definitely one way to get ratio’d and/or start an argument on Twitter.

Nah, he hit 61 without any performing enhancers

To settle this dispute, let’s find out what the man who hit home run number 61 thinks.

Aaron Judge is closing in on Roger Maris’s AL record of 61, but he says Barry Bonds is still the home run king: https://t.co/hvCxmlfPaJ pic.twitter.com/RYaiLijFUw

That should settle it, right? Hold on a second, says Roger Maris Jr.

“I think it means a lot, not just for me, I think it means a lot for a lot of people,” Maris said after Judge’s historic homer. “He’s clean, he’s a Yankee, he plays the game the right way. I think it gives people a chance to look at somebody who should be revered for hitting 62 home runs and not just as a guy who did it in the American League. He should be revered for being the actual single-season home run champ. That’s really who he is if he hits 62 and I think that’s what needs to happen. I think baseball needs to look at the records and I think baseball should do something.”

"He should be revered for being the actual single-season home run champ. That's really who he is if he hits 62."

“I asked him why he waited so long to kinda make me travel around the country,” Maris added. “The ironic thing was it was the ninth day I’ve been here [watching Judge]. He wears 99, dad wears 9. This is kinda weird how it all went together. Now we’ll probably go to Yankee Stadium and hit 62 on Oct. 1 when dad hit his 61st.”

So, Roger Maris Jr. wants Barry Bonds’ record of 73 home runs to have some sort of asterisk next to it? Kind of like the way his dad was tormented by fans and the media back in 1961 for hitting his 61st home run in the Yankees’ 163rd game and not in the 154 games it took Babe Ruth to hit 60?

That’s right. Baseball commissioner Ford Frick announced in the middle of the 1961 season that unless Maris broke Ruth’s record in the first 154 games of the season, the new record would be shown separately in the record books with some sort of “distinctive mark,” later suggested by New York Daily News sportswriter Dick Young to be an asterisk.

Is that what Roger Maris Jr. means? Because… irony.

Wow! Congrats to Aaron Judge for the incredible achievement of being 12 homeruns away from tying the record set by Barry Bonds in 2001

With his 61st home run, Aaron Judge passed Babe Ruth’s 60, but he did it on game 155, so he would have also been given Roger Maris’s asterisk. Thankfully it is 2022. Give the asterisk to the juicers.

Baseball is so fun.

Aaron Judge just hit #61 and it ought to mean even more to us. Thanks a lot, assholes. pic.twitter.com/ZjnkIxSDec