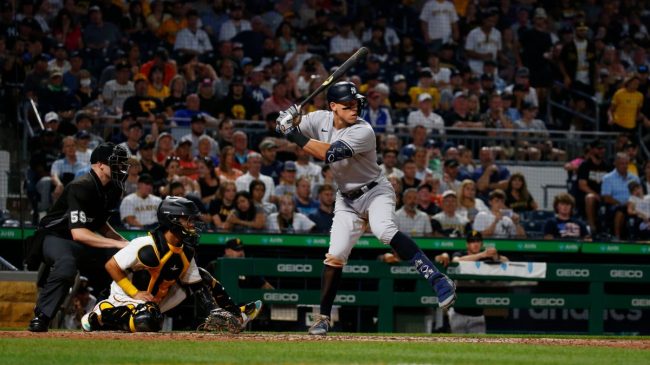 Aaron Judge is closing in on the Yankees’ single-season home run record. He currently sits at 60, one shy of record holder Roger Maris. Maris bashed 61 dingers for the Bronx Bombers in the 1961 season.

Judge is looking to both tie and break that mark, but he’ll have to do so over the final eight games of the year. He’s been stuck on 60 for seven games, with his last long ball coming back in September 20th.

With the historic 61st home run bound to come any day, Roger Maris, Jr. has been attending Yankee games in order to congratulate the slugger on reaching his father’s record. Unfortunately, that wait is taking a bit longer than expected.

Now, it’s not all Judge’s fault. He’s been walked 13 times over the last 32 plate appearances as no one wants to be the guy that gives up the record-tying dinger. But as this home run drought extends past a week, many are now questioning how much vacation time Maris has from work. He continues to show up at the ballpark night after night.

Roger Maris Jr. waking up and realizing he has to go to another Yankee game today pic.twitter.com/ehOIeNSbnf

Roger Maris Jr. showing up to the Yankees game every night to see Judge stay at 60 home runs:
pic.twitter.com/1Leh3KS4K9

Roger Maris Jr. is every husband that’s ever been dragged somewhere by his wife on an NFL Sunday. pic.twitter.com/9W1aP4IdsN

One fan hilariously asked, “How much clothing did Roger Maris Jr. pack for this now seemingly interminable trip of his?” This venture started in the Bronx, but the Yankees have now begun a road trip in Toronto.

How much clothing did Roger Maris Jr. pack for this now seemingly interminable trip of his

Damn, how many vacation days does Roger Maris Jr. have????

Judge is 0-2 in Wednesday night’s matchup with the Blue Jays, but if the record isn’t tied tonight, we’ll be sure to see Maris in the stands on Thursday.

In Judge’s fourth at-bat, the slugger launched a two-run shot to left field, tying Roger Maris’ record. The homer can officially end Maris Jr’s lengthy trip. That is, unless he plans on staying on to see No. 62, too.

Shoutout to our guy Roger Maris Jr. who has literally been trapped in a Groundhog Day style nightmare for the last week. Your watch has ended, sir. pic.twitter.com/EHN8ekX9fo

Roger Maris Jr can finally return to his family

The wait is finally over.