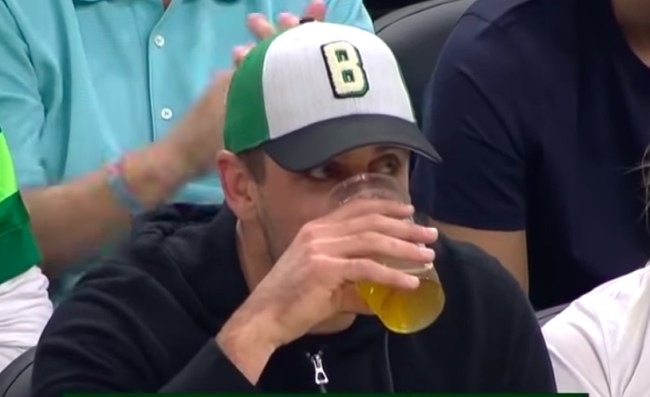 There is no shortage of ways to get fans fired up at sporting events, whether we’re talking about firing shirts into the crowd at high velocities, repeatedly urging everyone to clap their hands for eternity, or throwing a noise meter on the Jumbotron.

However, it seems like there’s one strategy that trumps most of the others when it comes to getting people amped: showing celebrities chugging booze.

In March, I fell more in love than I already was with Sophie Turner when she was captured slamming a cup of red wine while attending a Rangers game.

because of this video of sophie turner slamming red wine at a hockey game, I now conceptually understand religion and why people choose to subscribe to them pic.twitter.com/LaQla3tRV8

However, she’s far from the only person that’s showed off her chugging abilities—and inabilities—in recent months.

A couple of weeks ago, the Bucks hosted some Packers players during the Eastern Conference FInals—including David Bakhtiari and Aaron Rodgers, one of whom knows how to chug a beer and one who decidedly does not.

Rodgers was justifiably mocked for his ill-fated attempt and Matthew Stafford even took the time to show him how things are supposed to be done.

On Tuesday, a reporter asked Rodgers how he felt about the criticism that’s been thrown his way, and while you can say what you will about the quarterback, you have to admit his response was absolutely perfect.

I hope he didn’t break the mic after he dropped it as hard as he did. Those things are more expensive than you’d think.