Matthew Stafford Shames Aaron Rodgers, Gives Him Another ‘L’ By Showing How To Chug Beer Like A Champ 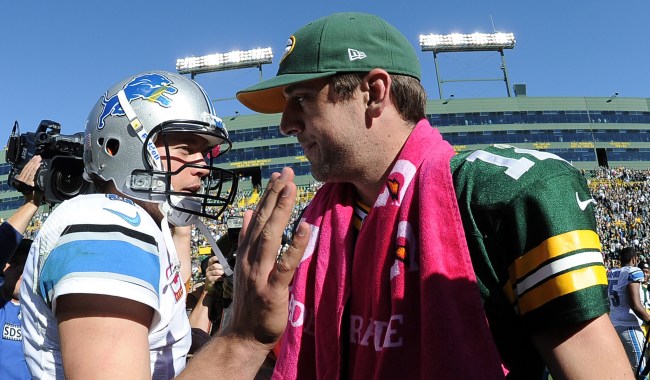 Once again showing that he is no Tom Brady, Green Bay Packers quarterback Aaron Rodgers took a big “L” Thursday night when he was challenged to a beer chugging contest by his teammate, offensive lineman David Bakhtiari at the Bucks-Raptors game.

While Bakhtiari easily downed three beers with ease, Rodgers couldn’t make it through one before raising a finger, asking for more time.

Rodgers’ NFC North peer Matthew Stafford of the Detroit Lions was watching the game at a bar/restaurant with his wife Kelly and apparently saw Rodgers sad fail and decided to shame him by slamming a beer of his own.

Stafford may only be 3-9 versus Rodgers in the NFL in his career, but he can definitively add that W to his total.

Now we just need to get him and Rodgers together to compete in the contest Aaron claims he would be a better competitor.

Even better, how about we get Rodgers together with Dale Earnhardt, Jr. for a chug-off to see which one of them is the worst at it.