Clint Bowyer Showed Up His Buddy Dale Earnhardt, Jr. By Shotgunning A Beer In Under 3 Seconds 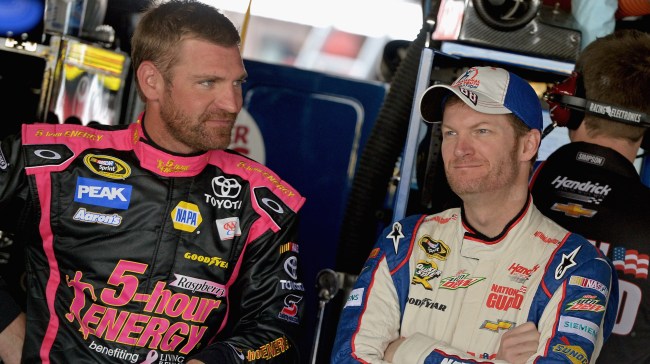 Prior to Monday’s Dale Jr. Download podcast, former NASCAR star Dale Earnhardt, Jr. suggested to current driver Clint Bowyer that they shotgun a few beers to get properly lubricated before Bowyer’s appearance on the show.

Sadly, for listeners, and Bowyer, who was voted the NASCAR driver who is the most fun at parties in 2017, Junior was just joking.

The two drivers did end up reminiscing quite a bit about the good old days, when they were younger and would tip a few back, as well as the times they saved a pig, put Jeff Gordon in a headlock, and routinely saw the sun come up after a full night, all of which was great, but what happened after the show is where it got really fun.

“Hey, Junior! Finally found somebody man enough to shotgun a beer with me because you wouldn’t on that radio deal we were doing. Thanks a lot,” said Bowyer on Twitter, referring to his wife Lorra.

Of course Junior, being the competitor and fun guy that he is, followed up with a comment and his own, slightly slower, shotgunning effort.

I was gonna do my best to have a conversation with you that wasn’t about raising hell. Its clearly impossible for the both of us. https://t.co/NMDuMmf8FQ