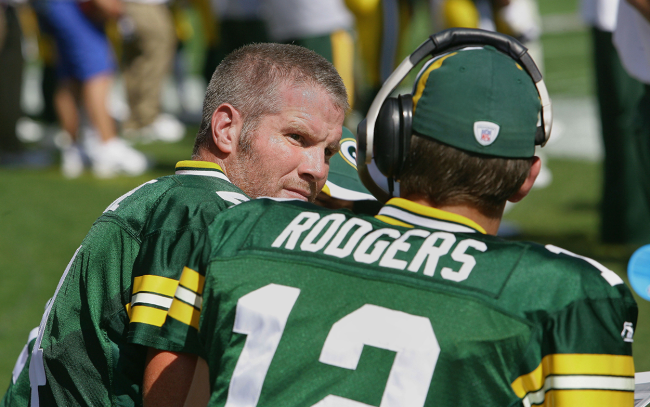 When the Green Bay Packers drafted Aaron Rodgers with the No. 24 overall pick in the 2005 NFL Draft, they already had a quarterback on the roster. Brett Favre was still QB1 and it stayed that way for three years while the former Cal signal-caller sat behind the veteran legend.

Rodgers, who is well on his way to a Hall of Fame career, recently spoke about his time as the backup. There have been reports that their relationship may not have been the strongest in the past, and that may still be true, but he learned a lot from Favre at the very least.

In an interview with CBS Sports’ Bryan DeArdo, Rodgers opened up on what he took away from his time as the understudy in Green Bay.

Aaron Rodgers said that even though he often had to do Brett Favre’s busy work, it made him a better quarterback.

“I was in his hip pocket all the time,” Rodgers said. “I was standing behind him in the huddle sometimes, listening to what he was saying before the start of a period. I was sitting in meetings with him, [taking] a ton of notes. I was watching hours of film on Mondays and Tuesdays trying to give him a little advantage for the week if I saw something that might help him in a game.”

Even when he felt like Favre didn’t want or use his help, Rodgers said that it helped him learn how to prepare.

“I would print out this reports every week. It had all the DB’s we were playing and the catches that were against them and the little things I saw on film. I always joked that he just toss them in the bin on the way out. But for me it was the best thing to learn to prepare for a game.”

Clearly, despite the fact that he had to wait his turn, the learning process was valuable. Rodgers is one of the best quarterbacks to ever do it!