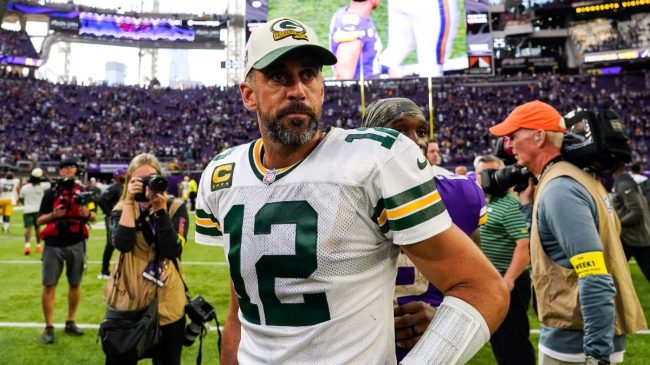 The Denver Broncos ended up losing to the Seattle Seahawks but had a chance to take a lead late in the fourth quarter. Head coach Nathaniel Hackett made a controversial decision to go for a 64-yard kick rather than trust Russell Wilson to make a fourth down conversion. Now, Green Bay Packers star Aaron Rodgers weighs in on the call.

During an appearance on the Pat McAfee Show, Aaron Rodgers shared his opinion on what transpired on Monday night. Nathaniel Hackett, the former offensive coordinator of the Packers, and now head coach of the Broncos, made a decision that shook NFL fans to their core. However, it sounds like Rodgers backs Hackett and believes Denver will be just fine moving forward.

"Nathaniel Hackett has real thick skin & I'm not worried about him at all"@AaronRodgers12 shares his thoughts on the end of the Broncos & Seahawks game #PMSLive pic.twitter.com/cE0lu5ScRp

Aaron Rodgers makes a fair point. The Broncos were in a weird situation in the closing minute of the game. The Seahawks forced Denver into a fourth-and-five situation and it’s not a guarantee that Russell Wilson even converts on that play. However, 64 yards is a massive field goal attempt, as it would have tied for the second-longest kick in NFL history had McManus nailed it.

Regardless, this is a decision Nathaniel Hackett and the Broncos have to live with. Perhaps this will be a learning lesson for the first-year head coach. Even so, Aaron Rodgers doesn’t seem to hate the decision, as he understood both sides of the argument throughout the clip.

We’ll see if the Broncos can bounce back in Week 2, as they take on the Houston Texans in Denver.