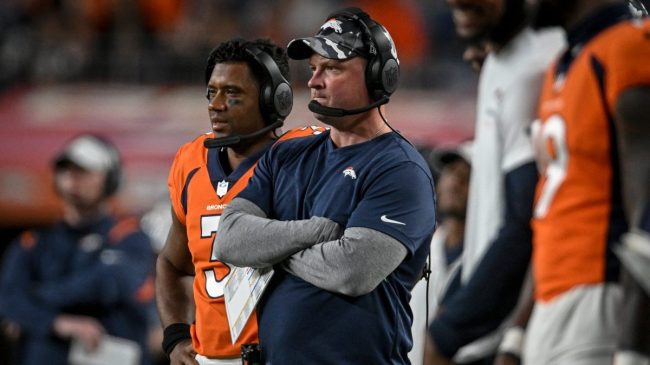 The Monday Night Football game between the Denver Broncos and Seattle Seahawks surprisingly came down to the wire. Although Denver had plenty of time remaining and a star quarterback leading the way, head coach Nathaniel Hackett chose to kick a 64-yard field goal rather than go for it on fourth down. Russell Wilson finally addresses the decision.

It was an odd decision as nearly everyone was yelling at their television for Hackett to call a timeout. Instead, the Broncos’ head coach let the time dwindle as much as possible before calling timeout. It resulted in a monster 64-yard field goal attempt for Brandon McManus, who missed the game-winning attempt. Now, Russell Wilson reacts to Nathaniel Hackett’s decision.

According to Sports Illustrated, Wilson backs his coach’s decision. Although it’s a bold strategy to attempt a desperate 64-yard field goal when they didn’t have to, Russell Wilson believes in the Broncos anyway.

“I think he has the leg for it for sure. Just went a little left I believe. I believe in coach Hackett, I believe in what we’re doing… believe in everything. Anytime you can try to find a way to make a play on fourth-and-5 that’s great too but also I don’t think it was the wrong decision.”

To be fair, Brandon McManus had the power but failed to kick it through the uprights. Just a little more to the right and the Broncos would have walked out of Seattle with a victory. Instead, the Seahawks defend their home and spoil Russell Wilson’s supposed “revenge game.”

At the end of the day, it was just a weird decision from the Broncos’ head coach. Even so, Denver is in good spirits as there is no need to panic. There are still 16 games to be played and Russell Wilson will have plenty of time to lead his team through the 2022 season.