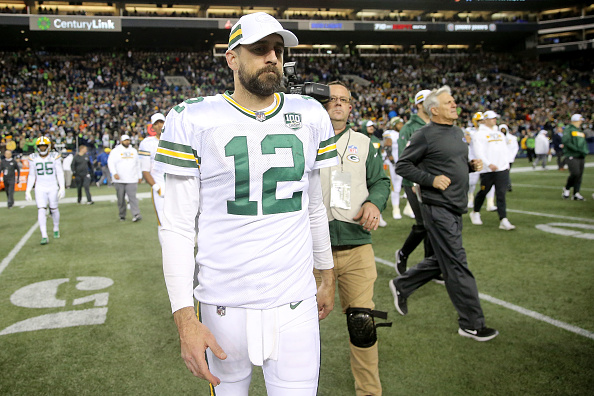 It seems like Aaron Rodgers and his family aren’t going to be reconciling in time for Thanksgiving this year. The Rodgers’ family feud has been brewing for quite some time now. According to a report from Bleacher Report, Aaron hasn’t spoken to his parents since 2014.

One source, who was close to Rodgers for years but is among the many who have since been cut off by Rodgers entirely, said the quarterback has not spoken to his family since December 2014. Don’t feel too bad, J-Mike. Immediate family members don’t even have his cellphone number. When Mom and Dad sent Christmas presents to the quarterback and his girlfriend that year, the source said, those gifts were mailed back in February.

Early this morning, the Packers QB and native of Chico, California posted a video trying to bring awareness and donations to the California wildfires.

Please take a minute to watch this and if you can, take a few seconds to retweet this using the #retweet4good
All the money goes to a great organization for the immediate needs and the recovery efforts for the #CampFireParadise
Thank you 🙏🏻 #ButteStrong #payitforward pic.twitter.com/iQjMbUIHcI

After Aaron’s tweet went viral his brother Jordan called him out for not calling to check in on their parents who are near an evacuation zone in California.

While Jordan has a point many on Twitter didn’t feel this was the appropriate time to publicly feud with his brother.

lol your brother is literally raising money for people in need and you still make it all about you?

Why use social media to discuss this with the world? Seems superficial and aiming to bring attention to you when your brother is attempting to make actual change. Get a life and maybe try to mend your relationship thru means that doesn't allow the entire world to participate…

Seriously. Shoot that to your brother in a text if need be .. wild.

This does nothing to help anyone, including his mother. This is a self gratifying attack. I don't disagree with his msg, but he was not thinking about his mother when he tweeted this.