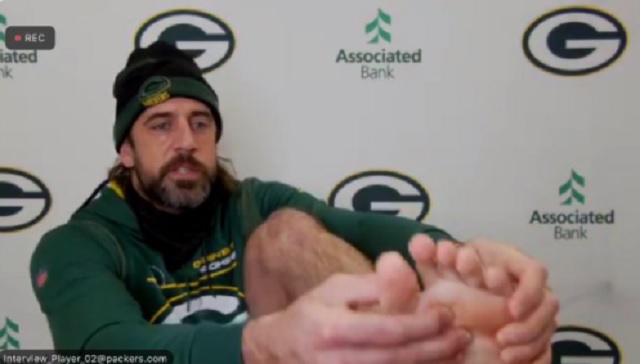 First and foremost, I want to thank Aaron Rodgers for being, as Stephen A. Smith so often says, a baaaaad man on the football field, as he and his Green Bay Packers were my bail-out bet on Sunday night, saving my dumbass from a week in the gambling red thanks to their relative dismantling of the Los Angeles Rams. Of all the quarterbacks to play in the NFL over the last decade or so, Rodgers has been, by far, my favorite to watch. Love the guy. Let’s just make that clear.

That said, my man A-Rodg has had himself a, uh, quite controversial year due to both his holdout earlier this Spring — you remember, when he was galivanting Hawaiian hills with his fiancee Shailene Woodley and Miles Teller instead of reporting to the Packers OTAs — and his “immunized” faux pas from a few weeks ago. The bottom line is that a lot of people have changed their minds about Rodgers over the last 12 months or so and he really has no one to blame other than himself.

That said, he mayyyyy have a point with these most recent comments he made on The Pat McAfee Show, where he implied that Green Bay Packers coaches may be leaking his medical information to the media.

“With these reports, I don’t know where they’re coming from,” Rodgers said. “I don’t know who’s talking. It seems like there are certain coaches that may have friends in the media that they don’t realize are actually just trying to report things.”

Shortly after, Rodgers said “there were guys for a while who had their people who they would leak stuff to.” That insinuation seemed to reflect that that active leaking was taking place, though there wasn’t much more detail within this particular exchange. [via Uproxx]

Stay woke, Aaron, stay woke. Rodgers and the Packers head into their bye this weekend before resuming their 2021 schedule against the Chicago Bears on December 12.