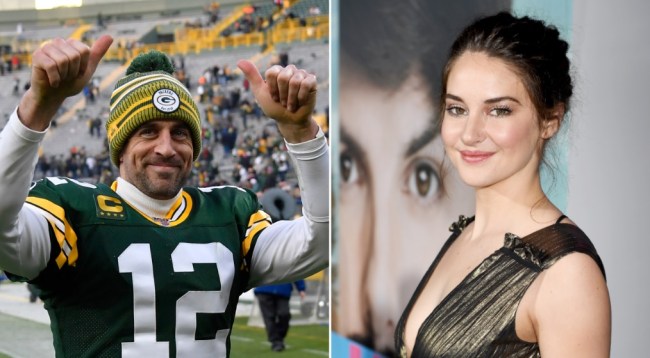 During his MVP speech, Rodgers revealed that he got engaged to be married during 2020.

Apparently Aaron Rodgers is engaged. He said in his acceptance speech that he got engaged this year and mentioned "my fiancé."

2020 was definitely a crazy year, filled with lots of change, growth and some amazing memorable moments. 180 days of getting my nose hairs scraped, playing for very little fans or no stands the entire season, I got engaged.

Earlier this week had been reported that Rodgers had been lowkey dating actress Shailene Woodley for some time now and that the two had decided to keep things private.

Aaron has been in Green Bay, Wisconsin, to stay “very focused on his season,” which came to an end on Jan. 24 when the Packers lost to Tom Brady’s Tampa Bay Buccaneers in the NFC Championship Game.

Meanwhile, Shailene has been working on-set in Montreal to film Misanthrope, according to Canada Live. The crime movie is directed by Damián Szifron.

“They have seen each other and been in touch,” the insider tells us. “They continue to talk and see each other when they can. They are both focused on their careers but they also make time for each other.”

Fans were stunned to hear that Rodgers was possibly engaged to Woodley.

SHOW US THE RING @shailenewoodley