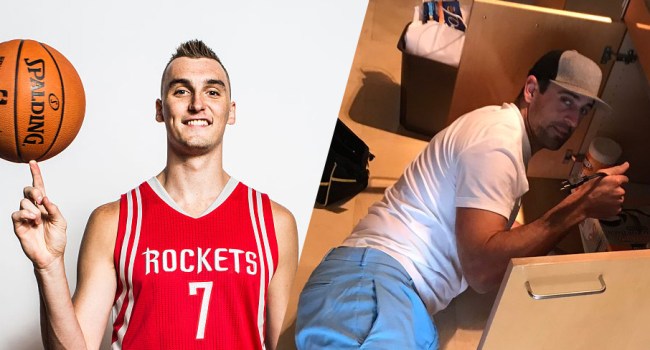 Over the weekend you may have noticed if you follow Clippers forward Sam Dekker on Twitter that he shared a photo of none other than two-time NFL MVP Aaron Rodgers laying on the floor of his house “fixing” his sink.

Turns out that, while the part about Rodgers lending a helping hand with the sink is true, he did anything but “fix” it, despite Dekker’s tweet.

Quarterback by day, mechanic by night. Thanks for fixing our sink @AaronRodgers12 pic.twitter.com/vebkqVnGvt

“I’ve actually fixed my own garbage disposal before. There’s incredible tutorials on YouTube,” Rodgers told reporters on Wednesday. “So I did that at one point. Fixed it.

“Sam, he just got traded to L.A., I was hanging out with him Saturday. He was having some sink issues, asked for my help. He’s 23 years old. I know he’s engaged and taking the next step to being an adult, but he’s not quite there yet. So I went under the sink.

“What the tutorial told me was to test the switch first, (and then) what kind of rumble you hear or lack of rumble tells you what’s going on with the garbage disposal. So, I flipped the switch and nothing happened. (That) means two things: One, it’s completely broken and it needs to be changed out, or two, it’s not plugged in.”

LOLOL…he’s “taking the next step to being an adult, but he’s not quite there yet.”

Yeah, there was no way Rodgers was just going to let Dekker slide on this one without making fun of his complete lack of common sense.

Even Dekker’s fiancee Olivia Harlan couldn’t help Dekker get out of this fail.

If you need a plumber, I know a guy. pic.twitter.com/p0KCBqpPbK

@naterosie18 I bet Brady couldn't do this smh