As A Rookie, Aaron Rodgers’ Teammates Thought He Was Gay, Was Regularly Tormented By Brett Favre 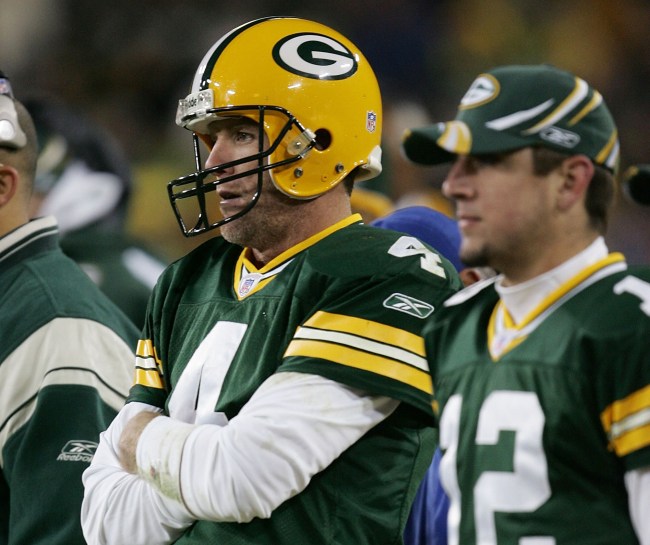 A fascinating new book by Jeff Pearlman called Gunslinger: The Remarkable, Improbable, Iconic Life of Brett Favre delves into life and career of one the NFL’s most successful and popular quarterbacks of all time.

It also doesn’t sugarcoat anything either as there are stories about how Favre used to go out drinking before Falcons games in his rookie year and other behind the scenes looks at various moments in his lengthy Hall of Fame career.

One of those moments was when the Packers decided to draft one Aaron Rodgers to be Favre’s heir apparent.

Much has been made of the relationship the two quarterbacks had, or didn’t have, depending on the story, but in the book it’s pretty easy to understand why there might not be much love lost between the two QBs.

Here’s a small portion of a larger excerpt from the book, courtesy of Bleacher Report…

Every so often the team placed varied items on a locker room table for the players to sign. Most were donated to charity. On this particular day one of the things to be autographed was a replica Packers helmet. Favre eyed it, turned to Nall and said, “You know what would be funny? If we put someone’s real helmet out there.” The next morning Rodgers arrived at the facility and could not locate his helmet. He looked, asked around—nothing. Most of his teammates were in on the joke and chuckling to themselves. Chad Clifton, an offensive tackle, told Rodgers that the marketing staff needed him to sign the items on the table. Rodgers grabbed a pen and, without knowing, scribbled “Aaron Rodgers” in black Sharpie on his own helmet. He walked onto the field still searching for his headgear. An equipment staffer finally brought him the one covered in ink. “Aaron,” he said, “this is yours ….”

Rodgers wanted to vanish. “He had to wear it all practice,” said Nall. “To his credit, he took it well.”

Not true. When practice ended, Rodgers retreated to his locker. Tomlinson, the reporter, approached. “He was about to cry,” Tomlinson said. “He was devastated. It was pure humiliation, and that Favre did it made it 100 times worse.”

“Aaron does not have a kind word to say about Brett,” said a friend of Rodgers. “Nothing even slightly kind. He was always a dick to him.”

It was never ending. Rodgers was the butt of jokes—some that he heard, many that he did not. A rumor circulated around the locker room that he was gay, based upon the fact that—unlike many of his teammates—he wasn’t one to brag about his penis size or his endless string of sexual conquests. Favre sought out Rodgers’ weaknesses (a bad throw, a clumsy scramble) and took a selfish pleasure in noting them. The problem, however, was that they were tough to find. Rodgers was Favre’s equal when it came to arm strength, and he was already, as a rookie, a far better decision maker.

No wonder there has been so much talk of bad blood between Favre and Rodgers, huh?

Thankfully for Rodgers he seems to have done just fine since then. Other than that whole family squabble he’s currently having, that is.

Check out the rest of this excerpt here and read a different one that discusses Favre’s rookie year with the Falcons here.