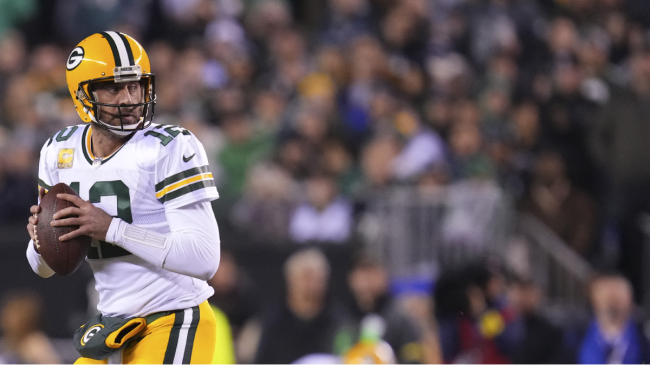 Aaron Rodgers has given an update on his playing status for Week 13 when the Packers take on the Bears.

The passer was injured late in action last weekend in a loss to the Eagles, forcing Green Bay to insert Jordan Love into the lineup to finish out the game. While Love played well in the 40-33 defeat, Rodgers’ most recent report will ease the minds of cheese heads ahead of a crucial division matchup in Chicago.

While making his weekly appearance on the Pat McAfee Show, the quarterback told viewers that he’d be ready to suit up against the Bears. All tests on his ribs came back negative, giving him an opportunity to start under center on Sunday.

“I got good news with the scans yesterday, so I’ll be playing this week.”

Rumors began to surface following that injury that the team might hold their star passer out of the lineup in an attempt to get him healthy. Those reports mainly pointed to the Packers’ 4-8 overall record as reasoning.

But Rodgers insists that the season’s not lost. He says that Green Bay has a chance to win the last five games and possibly slip into the playoff picture. Having Rodgers in the backfield gives the team the best opportunity to make that happen.

But while the news is welcomed by the Packers, Chicago Bears fans are down bad after hearing the update. Many on social media were quick to post reactions.

One fan wrote, “Sorry, Daddy is playing,” while another quipped, “One last time to own the Bears.”

Aaron Rodgers’ success against the Bears is well noted. He entered the 2022 campaign with a 22-5 career record versus Chicago, a mark that moved to 23-5 with a 17-point win in Week 2.

And he knows the personal dominance he’s shown over his NFC North rival. He’s gone as far as to say that he owns Bears fans, a notion he double down on in the interview with McAfee by calling it one of his favorite places to play.

“We’ll go to one of my favorite places down in Chicago and hopefully get a big win, get into the bye week and get healthy.”

Those fans in Chicago will unfortunately have to deal with No. 12 again this Sunday, and given the history, it doesn’t bode well for the Bears’ chances on the field.