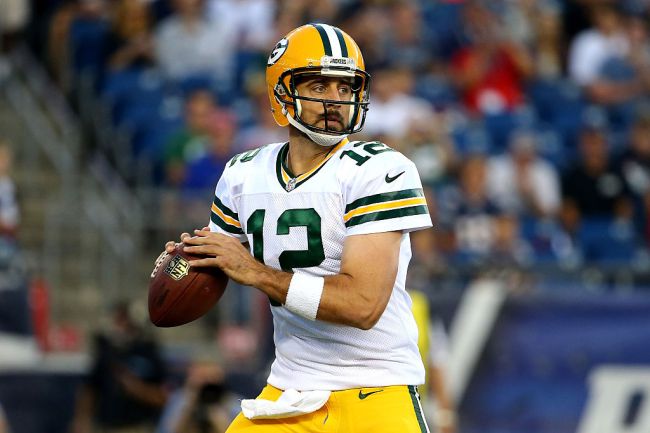 Aaron Rodgers has beef with the Packers front office but apparently paying him a ton of money could solve a lot of problems.

Earlier this week, Charles Robinson of Yahoo Sports reported that “money’s not the problem” for Rodgers and that he just has a personal issue with the team’s front office.

"Money's not the problem. It's his feelings towards the front office. It's him buying into the GM… That's what's got to be mended here and that can't really just be done with a contract."@CharlesRobinson says Aaron Rodgers needs something from the Packers that money can't buy pic.twitter.com/lO5bpX2hSo

“Money’s not the problem. It’s his feelings towards the front office. It’s him buying into the GM and the team president,” “… He’s talked about this idea that ‘it’s not about the corporation, it’s about the people who build the corporation.’ That’s what’s got to be mended here and that can’t really just be done with a contract.”

Pro Football Talk’s Mike Florio has refuted Robinson’s report and says while Rodgers does indeed have beef with the front office things could get resolved if he were paid a ton of guaranteed money to stay. According to Florio, Rodgers apparently wants a guaranteed $90 million over two years which would put him in Patrick Mahomes territory.

“Per a league source, it’s believed by at least one team that has (or had) interest in Rodgers that he wants $90 million guaranteed over two years. That would get him to the Patricks Mahomes $45 million high-water mark. With the $45 million average applying to only the first two years and with all of it guaranteed, the structure necessary to pay that kind of money would as a practical matter tie Green Bay’s hands through 2022 and potentially into 2023.

Although some have said it’s not about the money, the money becomes a way to fix a problem that former teammates continue to call fixable. By giving Rodgers the kind of contract that gives the Packers no choice but to (1) keep Rodgers, and (2) keep Jordan Love on the bench, the team necessarily resets the clock to pre-2020 draft, before the moment that the team clumsily traded up to get Love without telling first Rodgers. (Telling him first probably wouldn’t have made it much better.)”