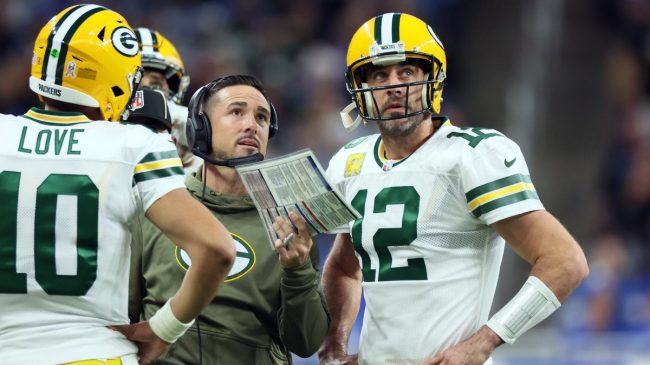 It was another long day for the Green Bay Packers, but luckily for them, they found a way to beat the Dallas Cowboys. Even so, it’s not like it was a smooth ride for Aaron Rodgers and the gang on Sunday. Especially after having a heated exchange with head coach Matt LaFleur. Now, Rodgers reveals what was said during the sideline spat.

In the middle of the contest, there was a moment where Rodgers was seen being visibly frustrated (again) and having a little exchange with Matt LaFleur. It wasn’t a great look for the Packers, as their starting quarterback and head coach were in the middle of what looked like an ugly spat.

In the postgame press conference, Aaron Rodgers revealed why he shared some heated words with Matt LaFleur. According to Sports Illustrated, Rodgers claims he was frustrated with, “just every single play call probably. Felt like we were 30 yards from winning the game in regulation.”

Later the Packers’ head coach addressed the sideline spat as well. However, LaFleur took full responsibility for the near debacle in the fourth quarter of the game, per Sports Illustrated. ” Indecision. A lot of times when we get in those situations, we give Aaron a lot of freedom to run the show. Today, he does a great job with it. So hindsight is 20–20. That’s on me.”

At the end of the day, it just sounds like both parties are just keeping themselves responsible. It appears the heated exchange was probably necessary for now. However, it’s easy to say that since the Packers took home the win. We’ll see if Aaron Rodgers can help Green Bay win another one, as they take on a tough Tennessee Titans team on Thursday Night Football.