Aaron Rodgers Literally Said He’s Run Out Of F’s To Give: ‘There’s A Lot Of Joy In Being Unapologetically Yourself’ 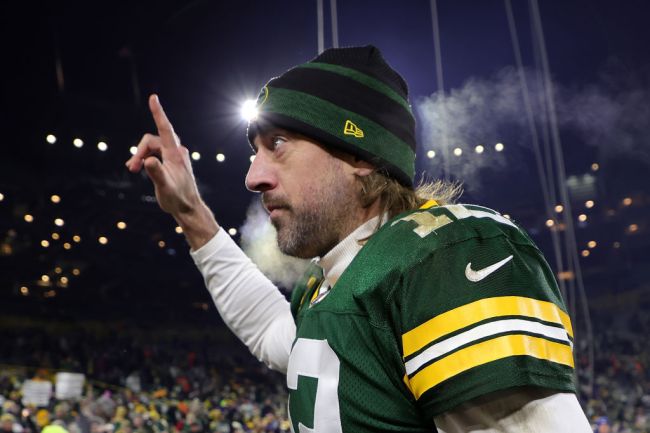 Yesterday, we brought you the story of reigning NFL MVP Aaron Rodgers telling Peyton and Eli Manning how he became so close with former Indianapolis Colts punter and current radio megastar Pat McAfee.

“We had a late drop-out [of golf] and my buddy, A.J. Hawk, said, ‘You should get Pat McAfee.’ So I reached out to Pat, and Pat was actually on a standup comedy tour. He came off the tour, joined our team and I went to him when he got there — I had never met him, I introduced myself and said, ‘Hey, when I introduce you at the welcome dinner, do you mind doing a couple minutes of standup?’ He goes, ‘Naw I’m not doing that,'” Rodgers said.

“Pat walks up on stage, takes the mic out of my hands, and does 10 minutes of standup, and I knew from that point forward we would be good friends. And I always appreciate that about him.

That friendship has been on display for the entire sports world to see as Rodgers makes weekly appearances on McAfee’s radio show, often using the platform to break news that McAfee gets credited for. It’s a real symbiotic relationship: McAfee gives Rodgers the space to say basically whatever the hell he wants, which then gives McAfee’s show further journalistic credibility and almighty views.

That trend of newsmaking continued this week, as Rodgers went on the show to quite literally detail how he’s run out of fucks to give:

“It really comes down to giving less fucks & that’s what I’ve tried to do the last couple years,” Rodgers said of his critics. “I think that it’s a maturity that comes from aging, from making mistakes, from failing, from being too sensitive at times, from taking things too personal at times, and it’s about growth.”

“And learning — not to be indifferent, because I think indifferent people are terrified of making choices and it’s a cold place to live — it’s about choosing what to care about, and the things that you do care about, it’s less [sic] things… There’s a lot of joy in being unapologetically yourself.”

"It really comes down to giving less fucks & that's what I've tried to do the last couple years.. there's a lot of joy in being unapologetically yourself" ~@AaronRodgers12#PatMcAfeeShowLIVE pic.twitter.com/YmrripWVGO

While I haven’t agreed with everything Rodgers has said this season, those are wise words to live by, indeed.

RELATED: NFL MVP Voter Says He Won’t Vote For Aaron Rodgers Because He Feels Rodgers Is A ‘Bad Guy’ And ‘The Biggest Jerk In The League’