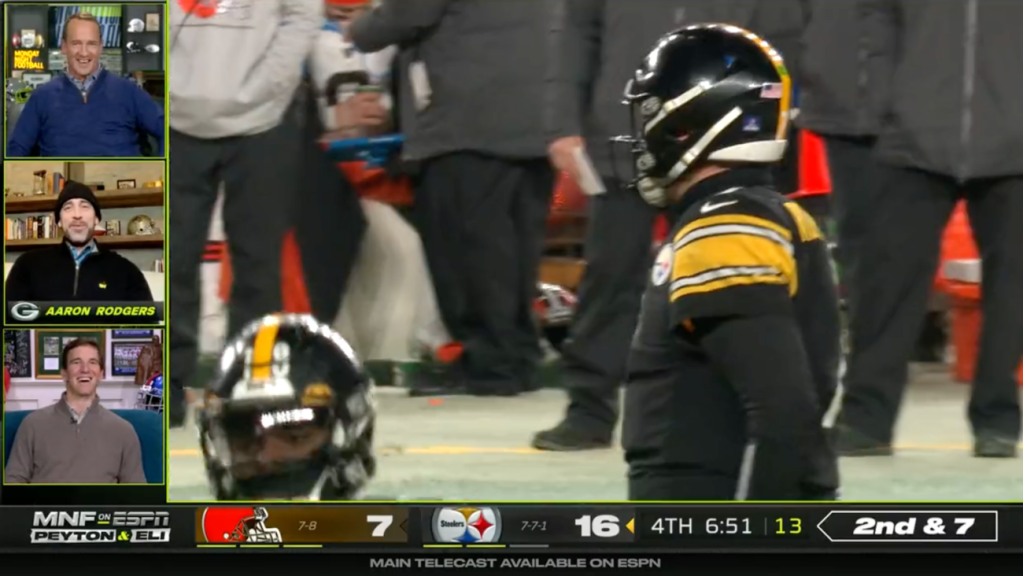 Aaron Rodgers and Pat McAfee are close friends. If they weren’t aware of it before, pretty much every NFL fan knows about their bromance after A-Rod’s recent appearances on Pat’s show.

On the surface, it seems like an unlikely friendship because they never played on the same NFL team. Pat McAfee was a punter for the Indianapolis Colts for his entire career and Aaron Rodgers has been with Green Bay since he was drafted in 2005.

As a guest on The Manningcast in the 4th quarter of Monday Night Football, Aaron Rodgers shared the story of how his bromance with Pat McAfee came to exist and it’s a good one. They’d never met before but Rodgers invited him to a golf tournament in another country. Aaron Rodgers then put Pat McAfee in a very awkward situation upon arrival. Here’s the video (below) along with the transcript if you’d rather read than watch or vice versa.

Story Of How Aaron Rodgers And Pat McAfee Became Friends

Legendary story of how @PatMcAfeeShow and @AaronRodgers12 became friends.

If you aren’t into watching videos, here’s the origin story of Aaron Rodgers and Pat McAfee’s friendship as told by A-Rod:

So I reached out to Pat, and Pat was actually on a standup comedy tour. He came off the tour, joined our team and I went to him when he got there — I had never met him, I introduced myself and said, ‘Hey, when I introduce you at the welcome dinner, do you mind doing a couple minutes of standup?’ He goes, ‘Naw I’m not doing that.’”

Pretty much any stand-up comedian on the planet will tell you that being put on the spot and asked to do material is a recipe for disaster. Especially when the crowd isn’t primed for comedy. But Pat McAfee rose to the challenge and the two have been close friends ever since, according to Aaron Rodgers:

“Pat walks up on stage, takes the mic out of my hands, and does 10 minutes of standup, and I knew from that point forward we would be good friends. And I always appreciate that about him.

He went the whole trip, he rolled his pants up to show off his quads, it was almost like he was wearing a short bathing suit. He played barefoot. I don’t think the golf worked out very well for him, but it was a partner event, I made sure he had a good partner every time and I think he was on the winning squad for most of his matchups.”

It’s absolutely wild to think about how Pat McAfee is making $30 million/year right now from his recent FanDuel deal. That’s two times the amount that Pat McAfee made throughout his entire NFL career ($15,040,044 in 8 seasons). It’s also more than Aaron Rodgers is getting paid by the Green Bay Packers this season ($25,500,000) for leading his team to the #1 seed in the NFC.

None of that has anything to do with the Aaron Rodgers Pat McAfee friendship, I’m just blown away but how much money Pat’s making right now from his recent deal.