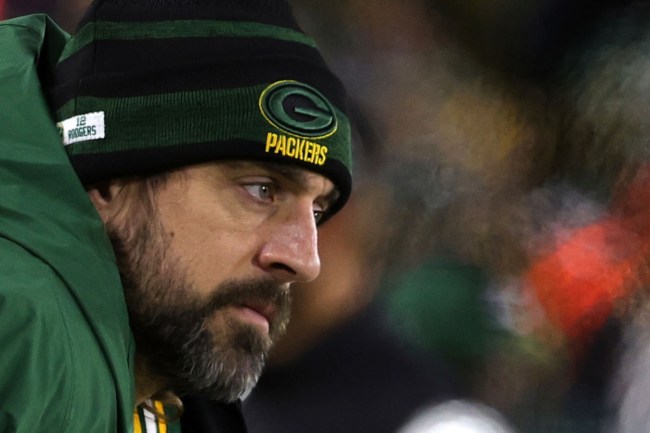 The Aaron Rodgers drama simply will not stop. Every other day it seems like there’s something new going on with Rodgers, whether it be issues on the field or off the field.

This time around the drama has to do with him actually playing the game of football.

The 38-year-old made his weekly appearance on ‘The Pat McAfee Show‘ earlier this week and the topic of retirement came up. Rodgers made some interesting comments about his future explaining that he loves playing because it’s his “happy place.”

Rodgers was asked to clarify the remarks he made on McAfee’s show during his session with the media on Wednesday. He made it clear that retiring after this season is very much an option on the table.

“I wouldn’t rule that out,” Rodgers explained. “I’m just enjoying this season for this season, and I think playing next year will definitely be in the thought process. One of the things — wanting to not be a bum on the way out, and still being able to play [well] is important to me.

“If this year has taught me anything, it’s I still can play. I still have a love for the game. I’m still super competitive and still enjoy the process of the week. I miss practice, and it’s tough to not be out there. I still do love competing and I love being out there.”

Aaron Rodgers “not ruling out” retiring after this season pic.twitter.com/KaVDhXMiPw

Rodgers Is Happy With The Packers, At Least Right Now

Rodgers also explained that he’s pleased with the direction the Packers are going at the moment, which says a lot given his frustrations with the franchise during the offseason.

“The things that I’ve said about the team this year, about [GM] Brian [Gutekunst]’s and I’s relationship, has been heartfelt and genuine,” Rodgers said. “I do appreciate a lot of the things I’ve seen from the team that are directly related to conversations we had in the offseason. That was meaningful to me.”

Rodgers’ current contract would allow him to become a free agent following the 2022 season. One would think that if the Packers were to go on and win this year’s Super Bowl then Rodgers would return and look for some sort of extension.

Then again, this is Aaron Rodgers we’re talking about, you never know what his next move may be.