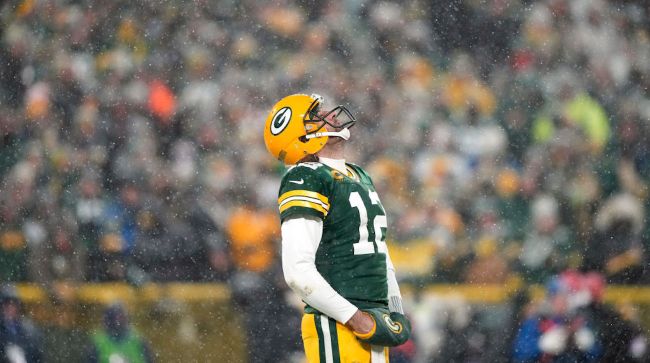 After losing stud wide receiver Davante Adams in a trade to the Las Vegas Raiders, Green Bay Packers quarterback Aaron Rodgers — and, most likely, a large portion of the team’s fan base — hoped that the team would attempt to fill the void left by Adams’ departure by selecting some offensive talent in the first-round of the 2022 NFL Draft. Unfortunately for both the reigning NFL MVP and Packers fans, though, that’s not how things played out.

Despite having two first-round picks in the 2022 NFL Draft — #22 and #28 — the storied NFC North franchise ultimately opted to bolster their defensive unit. With the 22nd pick (the one they received from the Raiders in exchange for Adams), they selected linebacker Quay Walker out of the University of Georgia, and with the 28th pick, they chose defensive tackle Devonte Wyatt, who also hails from the national title-winning Georgia Bulldogs.

Following the Packers’ significant investment on the defensive side of the ball, NFL fans took to Twitter — as they so often do — to clown on Aaron Rodgers and his current lack of pass-catching talent.

“You gonna pick a WR with one of your 1sts to make Rodgers happy for once?”

Aaron Rodgers after the Packers didn’t get him a WR in the 1st round…… again pic.twitter.com/S6b2IEjm9A

Aaron Rodgers: “We traded Davante Adams.. can we please draft a WR in the first round?“

Packers: We select another defensive player in the first round

They got 38 year old Aaron Rodgers out there with 4 doordashers at WR this year.

Congrats on your new LB to throw to! @AaronRodgers12

every single team going ham on WR's just to keep them away from aaron rodgers…. cute cute

I swear the Packers are trolling Aaron Rodgers

Everyone, joking: "Imagine if the Packers didn't draft a first-round WR for Aaron Rodgers AGAIN after trading Davante"

Aaron Rodgers: “Okay, but I still need a WR”

To make matters worse for the 38-year-old future Hall of Famer, he recently revealed that he believed Davante Adams would be a part of the Green Bay Packers’ future when he signed a new three-year, $150 million deal with the organization earlier this offseason.

“Obviously, when I made my decision I was still thinking he was going to come back,” Rodgers said during a recent appearance on The Pat McAfee Show.

Despite the apparent lack of offensive weaponry, the Packers are still one of the big favorites to win the 2023 Super Bowl with odds of +1000, which ranks among the best odds in the league behind only the Buffalo Bills and Tampa Bay Buccaneers, and tied with the Kansas City Chiefs and Los Angeles Rams.

RELATED: Aaron Rodgers Says He Thought Davante Adams Would Be Part Of The Packers’ Future When He Re-signed