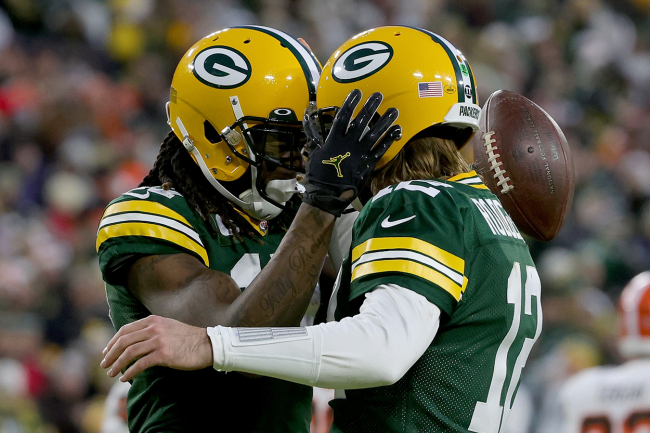 The 2022 NFL offseason has been absolutely bonkers. Things have been so crazy that it seems like Aaron Rodgers’ decision to return to Green Bay was months ago.

Although it has been somewhat overshadowed in recent weeks, Rodgers choosing to play for the Packers this fall makes them an immediate contender in the NFC once again. However, the team allowed two big receiver targets to move on.

Not only did Marquez Valdes-Scantling sign a massive deal to play with Patrick Mahomes in Kansas City, but Green Bay traded Davante Adams to Las Vegas. Although the decision was made with the team’s best interest in mind, it is going to hurt.

Adams is one of the top receivers in the league and leaves the Packers without a true No. 1 wide receiver. Rodgers has not commented on the trade, but his comments in the past make it very clear how much Adams will be missed by the MVP quarterback.

At the end of the 2021 season, Rodgers went so far as to say that Adams is the best player he has ever played with. And now he is gone.

Aaron Rodgers says calling Davante Adams best player he's ever played with is no disrespect to any other past teammates, but an acknowledgement to what Adams has done. "The type of dominance I've seen from Davante warrants that kind of praise."

There is a lot of time between now and Week 1 of the NFL season and Green Bay could choose to make a big move or two at the receiver position. Whether they do or do not, replacing “the best player” that Rodgers has ever played with is a tall task.