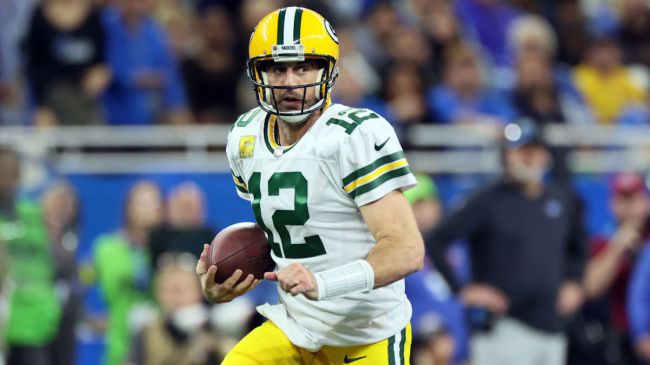 After two back-to-back MVP seasons in 2020 and 2021 — bringing his total MVP trophies to four — Green Bay Packers quarterback Aaron Rodgers is enduring perhaps the worst season of his career, as Green Bay has lost five straight games and currently sits at 3-6 through nine games.

The Packers’ 2022 season hit rock bottom on Sunday as the Packers’ once-imperious offense put up just nine points in a loss to the Detroit Lions. Despite the brutal nature of the loss, though — Rodgers himself tossed three interceptions, the most he’s ever thrown in one game — the QB still can’t seem to wrap his head around the fact that the Packers got straight up beat by the Detroit Lions.

Speaking to Pat McAfee on Tuesday, Rodgers stated that the Lions’ victory had more to do with his poor play and less to do with them just straight-up out-playing the Packers:

“No disrespect, but did they play great? I mean, we had 400 yards of offense on them, we’d go up on down the field, I threw an interception off a helmet, I threw an interception five yards short of Dave,” Rodgers said, referring to offensive tackle David Bakhtiari, who lined up as an eligible receiver and slipped past the Lions’ defense unnoticed to get open in the end zone, only to have Rodgers throw the ball short and get intercepted by Detroit’s Aiden Hutchinson.

Rodgers isn’t claiming he played well, but he is saying the Lions’ defense didn’t play particularly well either. “I didn’t play a great game, we made a lot of mental mistakes, but I didn’t think they really stopped us. We had three possessions in the first half and went up and down the field. It was more about us than them,” Rodgers said. [ProFootballTalk via The Pat McAfee Show]

Rodgers and the Packers will look to get their season back on track this Sunday when they host Dak Prescott and the Dallas Cowboys at Lambeau Field.

RELATED: Rodgers and the Packers will look to right the ship next weekend when they host Dak Prescott and the Dallas Cowboys.