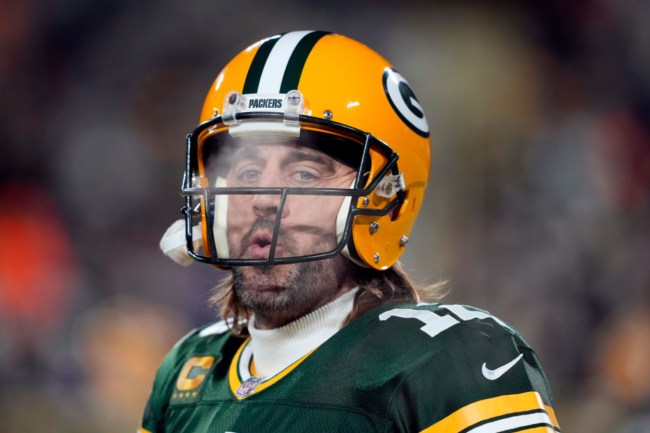 It was no secret that after all of the Aaron Rodgers drama that’s unfolded this year, many in the media were going to hold a grudge against him. Countless media members have blasted Rodgers about his vaccination status and the fact that he sidestepped the entire situation by saying he was ‘immunized’ last year.

Earlier this week, we got a real glimpse into at least one media member’s mindset toward Rodgers. Chicago-area sportswriter Hub Arkush, who holds an NFL MVP vote this year, admitted that he wasn’t going to vote for Rodgers because he felt the Packers QB is a “bad guy” and “the biggest jerk in the league.”

Rodgers was asked about Arkush’s comments during his press conference on Wednesday and called him a bum.

“If he wants to go on a crusade and collude and come up with an extra letter to put on the award and make it ‘The Most Valuable Vaccinated Player’ then he should do that. He’s a bum, and I’m not going to waste any time on that stuff.”

Rodgers’ comments about his vaccine status ring true as Arkush admitted in his comments that Rodgers’ vaccination status and the QB “lying” about it played a role in his opinion as well.

“I don’t think you can be the biggest jerk in the league and punish your team, and your organization and your fan base the way he did and be the Most Valuable Player,” Arkush said.

“We are told to pick the guy who we think is most valuable to his team. And I don’t think it says anywhere, ‘strictly on the field,’ although I do think he hurt his team on the field by the way he acted off the field” Arkush continued. “They’re gonna get the No. 1 seed anyway, but what if the difference had come down to the Chiefs game, where he lied about being vaccinated, and they ended up getting beat?”

Arkush got eviscerated for his take on Rodgers, and rightly so. If anything, it shows that some people do not deserve an NFL MVP vote if they don’t have the capacity to separate what really matters (Rodgers’ performance on the football field) and what doesn’t matter in the scope of the award (the way Rodgers carries himself and his decision about receiving a vaccine).