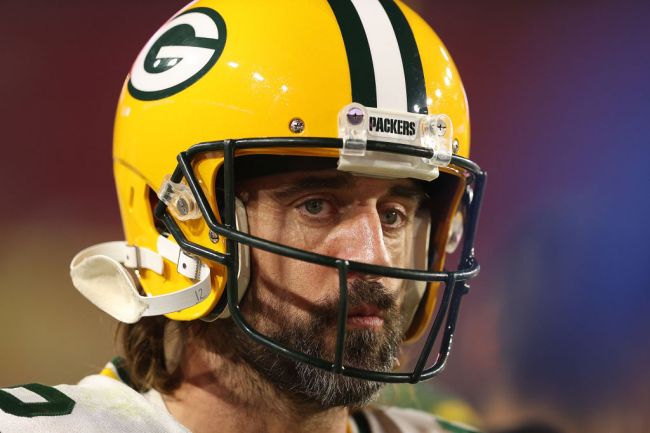 Aaron Rodgers will be sidelined for the Packers’ matchup against the Chiefs on Sunday after testing positive for COVID-19. Shortly after that news was reported, it was also revealed that Rodgers is not vaccinated.

The news of Rodgers being unvaccinated was surprising given the fact that back in August he told reporters that he had been “immunized.”

According to ESPN’s Rob Demovsky, Rodgers underwent an alternate treatment during the offseason and later petitioned the NFL to grant him full vaccination status as a result of the treatment, despite not receiving the jab.

“Rodgers petitioned the NFL to have an alternate treatment that he underwent before he returned to the Packers that would allow him to be considered the same as someone who received one of the approved vaccinations, sources told ESPN. After a lengthy back and forth, the league ruled that Rodgers would not get the same consideration and would be considered unvaccinated.”

While the news of Rodgers being unvaccinated is new to the public, the Packers have known from the start of the season that their QB had not received the vaccine.

Ian Rapaport joined ‘The Pat McAfee Show’ on Wednesday and explained that Rodgers had been following protocols for unvaccinated players being enforced by the NFL.

BREAKING: "The Green Bay Packers have known for a very long time that Aaron Rodgers is not vaccinated.. Rodgers has been following the Covid-19 protocols for those that are unvaccinated" ~@RapSheet#PatMcAfeeShowLIVE pic.twitter.com/4HyuyUzi2Y

Given his unvaccinated status, Rodgers will be forced to be isolated from the team for a minimum of 10 days before he’s permitted to return to action. This would mean that a return prior to next week’s game against the Seahawks is a possibility.