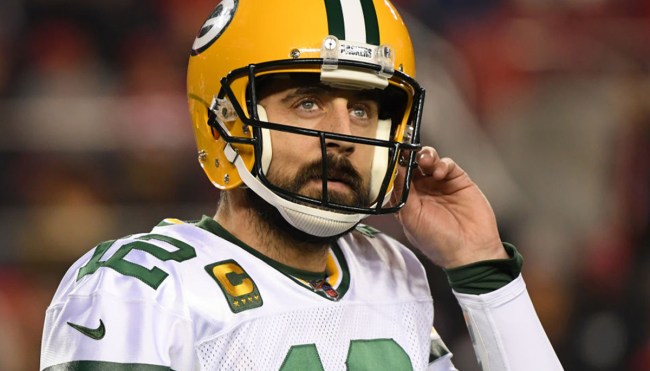 On Tuesday, Aaron Rodgers stopped by The Pat McAfee Show for a weekly appearance that saw him accuse Tom Brady of stealing his cadence and tease the appearance of a special guest who was set to join him in Kansas City when the Packers face off against the Chiefs on Sunday: the khaki-wearing legend known as “Jake from State Farm.”

Aaron Rodgers via @PatMcAfeeShow said "Jake from @StateFarm" will be in attendance Sunday for the #Packers #Chiefs game and will remain neutral with him and Patrick Mahomes playing.

Did say Kevin Mimms who plays Jake is a #Bears fan.

However, it would appear that plan hit a bit of a hitch less than a day after it was initially unveiled, as NFL fans were treated to one hell of a surprise on Wednesday morning after learning Rodgers will not play in this weekend’s contest after testing positive for COVID-19.

Sources: #Packers QB Aaron Rodgers tested positive for COVID-19 and is out for Sunday’s game against the #Chiefs.

Prior to the start of the season, Rodgers confirmed he’d been “immunized” against the illness, which most media outlets seemed to interpret as confirmation he’d received the COVID-19 vaccine. However, according to Ian Rapoport, the quarterback did not actually get the jab.

#Packers QB Aaron Rodgers is unvaccinated, per me and @MikeGarafolo. That’s why he’s out for Sunday vs. the #Chiefs.

If that had been the case, he would’ve been able to play on Sunday if he’d recorded two negative tests over a 48-hour period leading up to the game. However, thanks to the NFL’s policy concerning unvaccinated players, he’ll be forced to isolate for a minimum of 10 days before he’s permitted to return.

As a result, it looks like Jordan Love will be facing off against Patrick Mahomes in a battle of two quarterbacks with a skillset that currently leaves a ton to be desired.