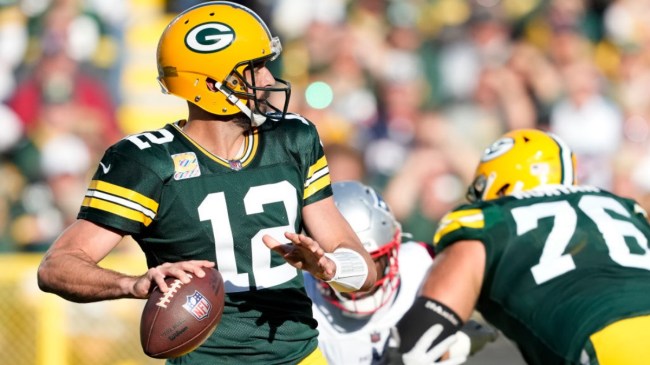 Despite entering the season with some major question marks at wide receiver, the Green Bay Packers have seemingly been getting their passing game figured out over the past couple of weeks.

Last week, the team didn’t manage to score a ton of points, but Aaron Rodgers appeared to finally begin to figure out which receivers he can trust as the passing attack takes shape without Davante Adams.

In that game, Romeo Doubs commanded a team-leading 8 targets and turned them into 8 catches for 73 yards and a touchdown. Rodgers also target Allen Lazard 6 times and started to lean less heavily on passes to his running backs.

In Week 4, that trend continued. Against the Patriots, Doubs was once again targeted 8 times, catching 5 of them for 47 yards and a touchdown. Lazard also saw 8 targets and caught 6 of them for 116 yards. Rodgers’ 6 passes thrown to his running backs tied a season low.

Despite the improvements in the passing attack since a rough Week 1, Rodgers still has a star receiver in mind that he’d like to see join the squad. On today’s episode of The Pat McAfee Show, Rodgers revealed that he’s hoping to team up with Odell Beckham Jr.

Aaron Rodgers is hoping to team up with Odell Beckham Jr

"@obj & I have been friends for a number of years now.. you're always hoping there's a time where you can figure things out & play together" ~@AaronRodgers12#PMSLive #ART pic.twitter.com/wBk6Rdy2RE

With the oft-injured Sammy Watkins already on injured reserve and 2nd-round pick Christian Watson struggling to make an impact, it certainly wouldn’t hurt for the Packers to bring in another dependable option for Rodgers to target.

Interest in Odell has grown quickly recently with the Giants also reportedly interested and the Bills and Rams both interested since the offseason.

With Odell expected to be cleared in November, we should soon learn which team will actually be the one he joins for the rest of the season.