Aaron Rodgers And Shailene Woodley Are Basically Back Together, According To Reports 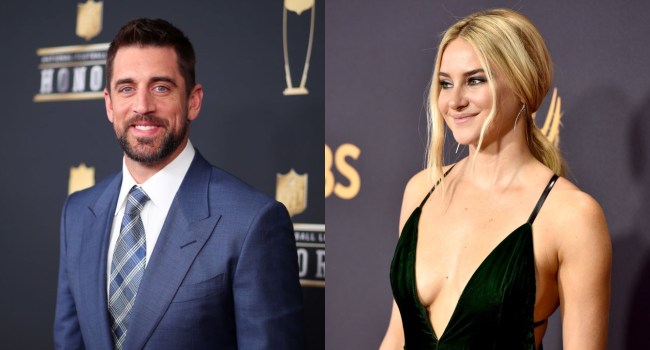 As someone who was born in the 1990s, I’m one of those people who believe there’s a Seinfeld reference for everything. Whether it be restaurant etiquette or family dynamics or relationship advice, if it happens in everyday life, odds are that Seinfeld covered it in some way, shape, or form.

So, naturally, when I read a new report that Aaron Rodgers and his former (current?) fiancée Shailene Woodley are kinda sorta back together — “Things are different now, but they were definitely over,” a source told Us Weekly — my brain immediately went to the Seinfeld episode where George Constanza’s latest girlfriend Maura simply refuses to accept his attempt at breaking up.

As for the relationship status of the current two-time defending NFL MVP and the 30-year-old Divergent actress, here’s what that source further told Us Weekly:

“Now that Aaron is in [the] offseason, he has more downtime and can focus more on a relationship. Shailene is understanding and open — she hasn’t shut the door completely or [she] would’ve never agreed to meet up with him.”

“No one, including them, knows what the future holds — they can possibly get back together or they can decide they aren’t meant to be. That’s up to them to figure out.”

Sure sounds like another famous Seinfeld moment, wherein Jerry explains to Elaine that breakups are like “knocking over a Coke machine” as it can’t be done in one try as you actually need to “rock it back and forth” a few times before it “goes over.”

So, good for Aaron and Shailene, I guess? More importantly, though, if you’ve yet to binge Seinfeld, it’s currently streaming over on Netflix so go educate yourself. Because remember: if it happens in everyday life, odds are that Seinfeld covered it.