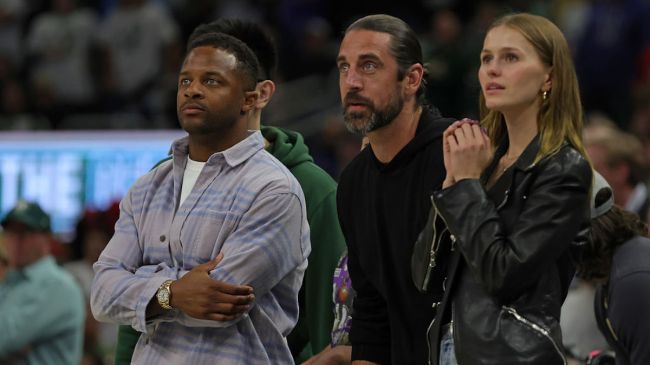 Green Bay Packers quarterback Aaron Rodgers — celebrating his 39th birthday — was spotted sitting courtside at Friday night’s Milwaukee Bucks game with Mallory Edens, the 26-year-old daughter of Bucks’ owner Wes Edens, according to People. At this time, however, there are no confirmed reports that the pair are romantically involved.

Rodgers was previously engaged to actress Shailene Woodley, although the pair called off their planned nuptials back in February. Prior to that, longtime Packers signal-caller has been linked with the likes of actress Olivia Munn and NASCAR driver Danica Patrick.

The four-time NFL MVP and future Hall of Famer is in the midst of perhaps his most difficult season as a professional as the Packers currently sit at 5-8 and are on the outside looking into the NFC playoffs.

Through 13 games this season, Rodgers has completed 64% of his passes for 2,864 yards, 22 touchdowns, and 9 interceptions. Those nine picks represent the most that Rodgers has thrown in a single season since 2010 when he threw 11 picks across 15 games started.

To close out the difficult 2022 season, Rodgers and the Green Bay Packers will face off against the Los Angeles Rams, Miami Dolphins, Minnesota Vikings, and Detroit Lions. As things currently stand, the Packers trail the Seattle Seahawks, Washington Commanders, and Detroit Lions for the 7th and final seed in the NFC playoffs.

RELATED: This One Fact Likely Guarantees That Aaron Rodgers Will Return Next Season, For Better Or For Worse