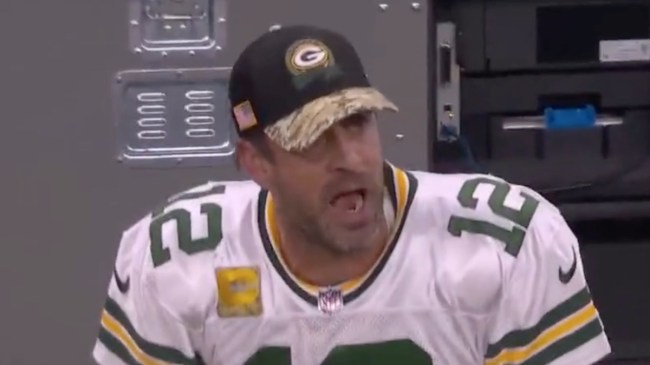 During his weekly appearance on The Pat McAfee Show, Green Bay Packers quarterback Aaron Rodgers was sure to remind everyone that he still greatly believes in his abilities of Aaron Rodgers.

Despite the fact that the Packers have lost five straight games and now sit at 3-6, Rodgers’ confidence is far from dented as he explained to McAfee that he’s “still the reigning, defending two-time MVP.”

“I always believe in myself first and I bet on myself first to go out there and to impact the game and to be great. I still know I have that within me,” Rodgers said during his weekly apperance on The Pat McAfee Show.

I’m still the reigning, defending two-time MVP. Regardless who’s out there with me, guys want to come battle they know where to find me. I’ll be in the center of that huddle, expecting greatness, trying to inspire the best I can and lay it out on the line.”

"Two of the interceptions weren't great throws.. I've thrown TD passes many times & I don't give a shit what any of these experts on TV have to say" ~@AaronRodgers12#PMSLive pic.twitter.com/RCaIXRbzMC

Rodgers and the Packers, who are now virtually out of contention for the NFC North title barring a catastrophic collapse from the (currently) 7-1 Vikings, will look to get their season back on track this Sunday when they host Dak Prescott and the Dallas Cowboys in a crucial matchup.

If the Packers are going to have any shot at claiming one of the NFC’s three wild card berths, they’ll have to start stringing some wings together soon, as they currently trail teams such as the San Francisco 49ers, Washington Commanders, Atlanta Falcons, and Los Angeles Rams.

Following their matchup with the Cowboys on Sunday, the Packers will then gear up for a Thursday Night Football matchup against the Tennessee Titans just a few days later.

RELATED: Aaron Rodgers Is Doing The Exact Thing He Said He Would Never Do, Says Former Teammate