Aaron Rodgers Is Doing The Exact Thing He Said He Would Never Do, Says Former Teammate 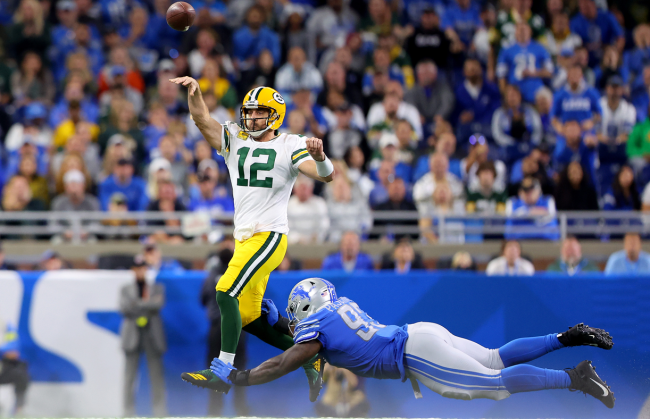 According to Aaron Rodgers’ ex-teammate Greg Jennings, the Packers quarterback is now doing something that he claimed before he was the team’s starter that he would never do.

“Brett, he was one of those guys, he never got… no one ever thought it was his fault,” Jennings recalled.

“And at some point… and we understood, like, Brett Favre, he’s the face of the NFL, blah, blah, blah, when I first came in.

“I recall a young Aaron Rodgers identifying that and saying, ‘I’m never gonna do that. I’m not gonna be that.’ And then you grow, you have success, and everybody starts to tell you how great you are, and you forget that the guys in the locker room are your greatest accountability.

Greg Jennings shared that when Aaron Rodgers was Brett Favre's backup, a young Rodgers told his teammates that he'll never do what Favre does and avoid accountability. Now, he's doing just that.

In fairness, after Rodgers threw three interceptions, including two in the red zone in the Packers’ sixth loss in nine games on Sunday, did admit, “I played sh-tty.”

However, on Tuesday on The Pat McAfee Show, Rodgers said after subtly blaming his offensive teammates for why he made a throw that was picked, “I’ve thrown TD passes many times and I don’t give a shit what any of these experts on TV have to say.”

Rodgers has been rather vocal over recent years about not having the desired weapons he wants on offense.

ESPN’s Jeremy Fowler reported this week that “some of the young wide receivers have been painted as scapegoats for the Packers’ problems, despite Aaron Rodgers’ absence during OTAs, which isn’t sitting well with some there.”

Earlier this month, one NFL executive claimed part of the reason the Packers haven’t signed anyone of significance to help him is because “nobody is good enough” for Rodgers.

“They can’t please him,” so why “spend premium draft capital on someone the quarterback probably will not like?” he added.

The good news for Aaron Rodgers is that this week Packers unexpectedly signed a former All-American wide receiver to their roster. Granted, he was a JUCO All-American at Pima College, but still…

Jeff Cotton, who began his NFL career as a undrafted free agent who signed with the Los Angeles Chargers in 2020 (but never played for them) is now a member of the Green Bay wide receiving corps.

Cotton was later signed by the Jacksonville Jaguars and the Arizona Cardinals after one year with Los Angeles (he never played for them either).

Good luck on Sunday against the Cowboys, Aaron.