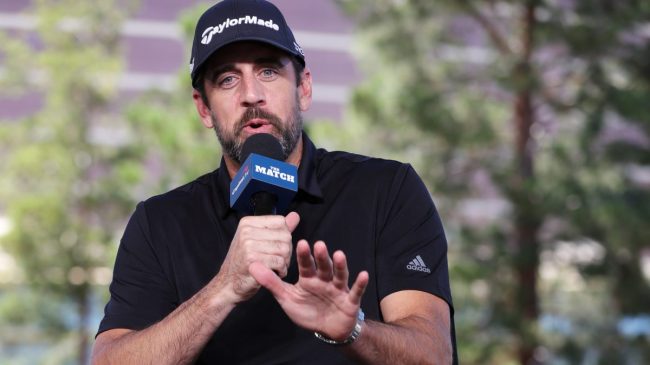 Aaron Rodgers got some new ink this week, and he’s posted the tattoo on social media.

The new tat shows two lions facing one another from across some sort of geometric sign you’d see in an astronomy textbook. Above the lions appears to be the Eye of Providence. Below the lions is the open sea.

While I’m sure there is some sort of meaning behind the new art, it’s not been made abundantly clear to followers on social media. Rodgers’s new girlfriend, Blu, might say she’s not a witch, but this latest development has many skeptical.

Is Rodgers now turning into a conspiracy theory chasing hippie? Has he fallen into some secret underground society? Robert Langdon might be able to weigh in.

Or maybe Rodgers just watched a little too much of the Kyrie Irving free agency saga this offseason.

In either case, the new ink has many reacting on social media.

Fans and media are reacting to the tattoo on Twitter. No one’s quite sure what it means.

What was the inspiration behind the design? Does his new love interest have something to do with it? Social media is debating these things and more.

Rodgers Putting This Up In His Room As Soon As He Gets Home. https://t.co/3QnoTxES7t pic.twitter.com/BvyCTEdWB7

Spent too much time in Boulder https://t.co/NoUiLpXQKo

Finally a physical manifestation of the toxic conspiracy theories that apparently run through his head all day https://t.co/J2MAxgihsU

Mf dates a girl with a tapestry on her wall ONE TIME and then does this https://t.co/BT7LcgRAlb

Tattoo artist: “What do you wanna do today?”

Aaron Rodgers: “Have you ever heard Kyrie Irving talk?”

Tom Hanks needs to explain these symbols to us https://t.co/bIneeFjYHA

He solved the quadratic equation of winning MVP but no Super Bowl https://t.co/nJGvzw4Ops

Don’t know what it means, but it’s fie https://t.co/oEQfhIKvuo

Someone has to bring this up in an interview. The world needs answers!

Rodgers hopes the addition shows him the way to the Super Bowl in 2022. The reigning MVP will try to take home the Lombardi Trophy in the upcoming campaign.