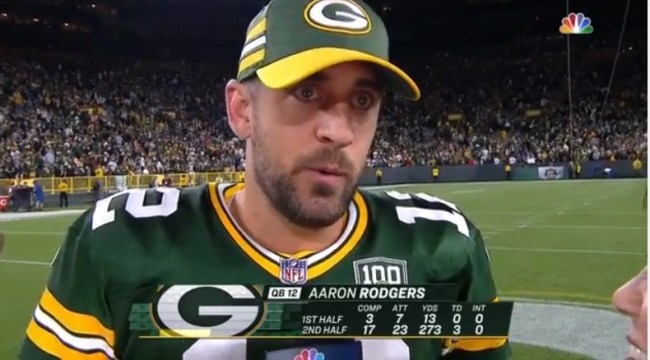 It hasn’t really been Aaron Rodgers’ night so far. Not only have his Green Bay Packers looked like complete crap against the 1-4 San Francisco 49ers, but even with a 350-yard-plus game, Rodgers needed everything in him to will his team to overtime. But, hey, that’s why the dude is one of the best signal-callers of all-time, right, because that’s what he does.

Just when this guy is down and out and you think his team’s screwed, he does things like this. My goodness, he really is a cheat code against every defense that goes against him.

Aaron Rodgers is a cheat code.

AARON RODGERS DOES IT AGAIN! pic.twitter.com/46IQfp2xH5

"Football is a team game. You need offense AND defense to win."

Just when you thought this was going to be Rodgers’ defining moment this week, he takes over inside his own 20, leads his Packers down the field and, boom, his kicker, Mason Crosby, comes through with the clutch kick for a chip shot field goal as time expired. Yeah, the same Crosby who blew it last week against the Detroit Lions by going 1-5 on field goals and 0-1 on extra points.

Man, there’s nobody like Aaron Rodgers, and this is the latest performance to prove that.