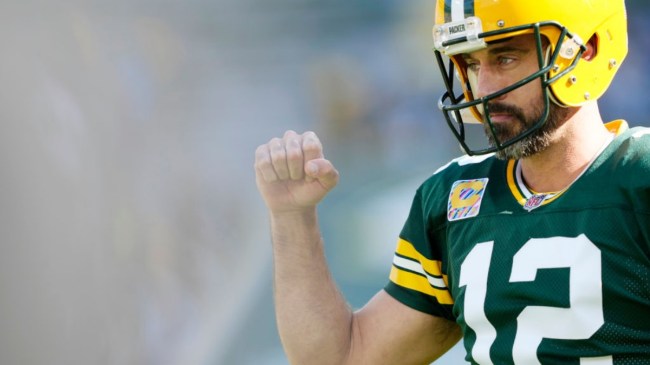 The Green Bay Packers have seemingly started to get things figured out on offense. Their Week 1 performance was an ugly one as they tried to determine their hierarchy at wide receiver and which pass catchers Aaron Rodgers could really depend on.

Over the last 3 weeks, those things have become clear. Allen Lazard has gotten healthy and has stepped up over the past 2 weeks. Rookie Romeo Doubs has begun to live up to all of the hype we were hearing about him during camp. Randall Cobb and Robert Tonyan have once again established themselves as players Rodgers can lean on.

Even with the recent improvements, Rodgers still sees one important change he wants made to the team’s passing attack. Rodgers wants the Packers to air it out more the rest of the way.

Hell yeah, of course. Matt’s kind of in a grumpy mood right now. When he gets a little bit of rest and will be in a better mood, we’ll talk about airing it out a little bit more.

This is a change that would make the Packers’ passing attack more dynamic as they currently rank in the bottom half of the league in yards per completion and right around league average in yards per pass attempt.

More importantly, it would also incorporate another weapon for Rodgers. The Green Bay Packers traded up to land Christian Watson in the second round of the draft this year, but he hasn’t made much of an impact yet. Airing it out would help change that.

Watson’s speed was quickly on display in Week 1 as he torched the Vikings defense, but was unable to make the catch for what would have been an easy touchdown. Throwing more deep passes would give Watson more opportunities to utilize that speed and give Rodgers another weapon for defenses to worry about.

If we see the Packers start to have success with the deep ball, they could once again be a tough offense to stop even after the changes their passing game underwent this offseason.