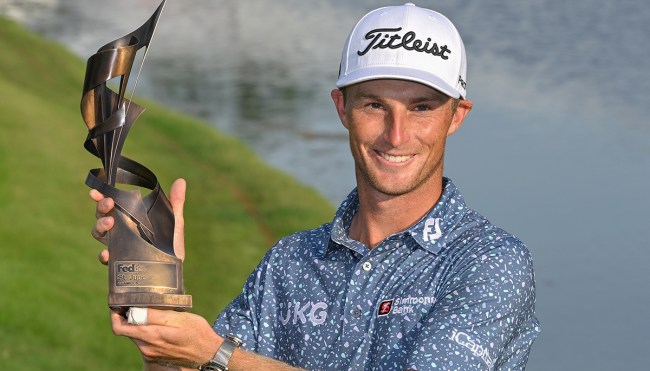 It didn’t take long for Will Zalatoris to start to make a name for himself after racking up enough accolades on the Korn Ferry Tour to earn the exemption that made him a regular fixture at PGA Tour events beginning in 2020.

After securing a number of Top 10 finishes, the Texas native officially became impossible to ignore after he secured second place at The Masters in 2021, where he was just one stroke short of taking home the green jacket Hideki Matsuyama ultimately earned the right to don at Augusta.

That was the first time Zalatoris popped up on a lot of people’s radar, and it didn’t take long for plenty of golf fans—including Adam Sandler—to point out his uncanny resemblance to Jared Van Snellenberg, the actor who played the caddie who was initially assigned to the eponymous golfer in Happy Gilmore.

Zalatoris rightfully took home Rookie of the Year honors following his inaugural campaign and picked up right where he left off this year: in May, he came up just short in another major after losing to Dustin Johnson in a playoff at the PGA Championship before finishing one stroke shy of a victory yet again by tying for second at the U.S. Open in June.

The results of those tournaments were especially frustrating when you consider Zalatoris was still in search of his first win at any PGA Tour event, and you have to assume his inability to get over that hump played a role in his decision to part ways with his longtime caddie Ryan Goble in the middle of the Wyndham Championship earlier this month.

However, that decision seemed to work out pretty well when you consider what unfolded when the FedEx Cup Playoffs kicked off at TPC Southwind in Memphis.

On Sunday, Zalatoris successfully fended off Sepp Straka in a three-hole playoff to earn his first win on the Tour at the St. Jude Championship where he took home a cool $2.7 million in addition to enough points to put him at the head of the pack with two events remaining in the PGA postseason.

While he received plenty of congratulatory messages, none of them stood out more than one posted by Happy Gilmore himself, as Sandler contrasted a couple of screenshots from the movie with some photos from Zalatoris’ big victory while giving him props.